With seven overdose deaths in Cleveland in a single day, now is the time to act if you suspect a family member or friend is using heroin. 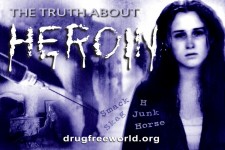 Cleveland.com reported Cuyahoga County, which has about 1.2 million residents, is on pace to record more than 500 overdose deaths this year from heroin or fentanyl—a powerful synthetic opioid similar to morphine but 50 to 100 times more potent according to the Centers for Disease Control and Prevention.

The Foundation for a Drug-Free World urges Cleveland residents to act now if they suspect a family member or friend may be using heroin.

The Foundation’s booklet The Truth About Heroin is available online and the chapter on the destructive effects of the drug lists its various manifestations. “If you have any questions whether a loved one is abusing this drug, read the booklet,” says Ambra Calzolari, Foundation for a Drug-Free World Coordinator. “And if it looks like they are, take it up with them, show them the booklet and help them get help.”

“Now is the time to have that discussion with your kids that you may have been putting off,” adds Bari Berger, Humanitarian Activities Coordinator of the Church of Scientology International, which supports the Foundation. “The Truth About Drugs materials take the guesswork out of talking to your kids. They were designed to get through to young people and they do. Use them.”

The Truth About Drugs booklets, public service announcements and documentary are available online on the Foundation for a Drug-Free World website. There is an ​app for the program, and support is available through the Foundation website.

The United Nations Office on Drugs and Crime points out that “for every dollar spent on prevention, at least ten can be saved in future health, social and crime costs.”