Drug and alcohol abuse and domestic violence are intimately linked. Marching for an end to violence against women and children, Drug-Free World South Africa joined forces with thousands in Pretoria July 10 at the 100-Man March. 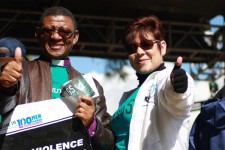 PRETORIA, South Africa, July 17, 2018 (Newswire.com) - When the 100-Man March launched July 10, Drug-Free World South Africa was there, lending its support and commitment to addressing the crucial issue of ending violence against women and children in the country.

Bearing banners and standing out in the crowd in their bright turquoise T-shirts and caps, Drug-Free World volunteers marched against the physical abuse of women and children alongside more than 1,000 men.

98 percent of abuse stems from drugs, alcohol, some form of addiction.

Drug-Free World also offers a solution. According to the World Health Organization, “Strong links have been found between alcohol use and the occurrence of intimate partner violence in many countries. Evidence suggests that alcohol use increases the occurrence and severity of domestic violence.” By reaching youth with the truth about drugs and alcohol, the Foundation is keeping kids off drugs. And fewer people abusing drugs will mean less violence.

Commissioner for Gender Equality Mbuyiselo Botha said one reason for the march was to honor former president Nelson Mandela and South African anti-apartheid activist Albertina Sisulu who would both have turned 100 this year. “We also wanted to put men at the center stage, to make sure that men raised their voices to say that violence against women would not happen and that they would not look the other way,” he said.

Drug-Free World South Africa Executive Director Carmen Margro, featured in a documentary on the Scientology TV channel, was among the dignitaries standing together on the stage at the end of the march.

In her documentary, "South African Hope," Margro describes the relationship between her campaign and the 100-Man March movement: “People tend to think that they could solve their problems by using drugs, not realizing that they are actually making it much, much, much worse. My main focus was on abused women and children. I found out that about 98 percent of abuse stems from drugs, alcohol, some form of addiction. And that is when my interest sparked. If I could get to the bottom of it, it could really impact the fact that women and children are abused every day.”

Drug-Free World volunteers handed out more than 5,000 copies of the Truth About Drugs booklets during the march to educate people about the harmful effects of drugs.

Headquartered in Los Angeles, California, Foundation for a Drug-Free World is an international nonprofit public benefit corporation that empowers youth and adults with factual information about drugs so they can make informed decisions to live drug-free.

Drug-Free World partners with civic and nongovernmental organizations including more than 1,200 police departments in the United States. Through its worldwide network of volunteers and partnerships, it has distributed more than 80 million copies of "The Truth About Drugs" booklets since these were first published in 2006. 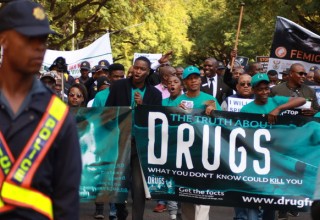 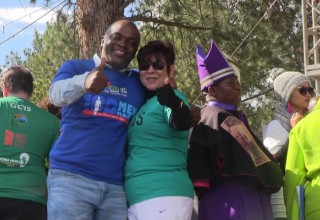 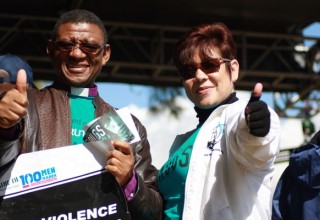 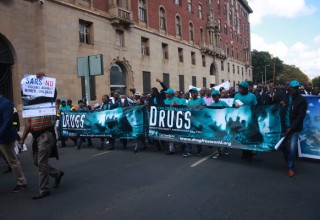