Committed to tackling drug abuse before it begins, a team of Drug-Free World volunteers is rolling through the Embarcadero to reach fans in town for the NFL's Super Weekend with the truth about drugs. 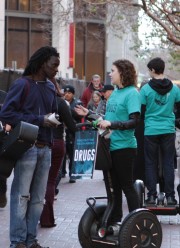 San Francisco, CA, February 5, 2016 (Newswire.com) - With more than a million expected to flood the San Francisco Bay Area for this year’s NFL championship, the Foundation for a Drug-Free World is reaching out throughout the week with factual information to help tackle the drug abuse epidemic.

Drug abuse has reached epidemic proportions in the U.S.:

"The most cost-effective way to reduce drug use and its consequences, [and] the best approach to reducing the tremendous toll substance abuse exacts from individuals, families and communities is to prevent the damage before it occurs."

One of the world’s largest nongovernmental drug education and prevention campaigns, the Foundation for a Drug-Free World is in the forefront of providing effective drug prevention.

The White House Office of National Drug Control Policy states that drug prevention is “the most cost-effective way to reduce drug use and its consequences,” and “the best approach to reducing the tremendous toll substance abuse exacts from individuals, families and communities is to prevent the damage before it occurs.” It also states that according to recent research “every dollar invested in school-based substance use prevention programs has the potential to save up to $18 in costs related to substance use.”

Parents, concerned their kids may already be taking drug, may speak to one of the volunteers to discover a simple way to broach the subject and help their children make informed decisions not to experiment with drugs or to quit before it’s too late.

The volunteers are also there to answer questions and arrange free drug prevention materials and training for any parents, mentors or educators wishing to do something effective to end the drug epidemic.