With rigid policies against privacy and safety violations, DroneStock could help bridge a gap. 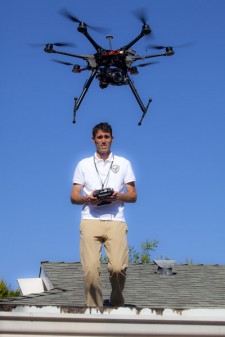 Hollywood, CA, November 3, 2016 (Newswire.com) - On the surface DroneStock.com is just another stock image website. You can buy royalty-free stock video clips and use them in your film and video projects. Photos too, for print ads and website use. But where this site differs is, all the imagery for sale has been captured by drones.

With ties in both Hollywood and Silicon Valley, founders Robert Hogg and Michael Duff set out to create a unique, drone-related experience. "We wanted to give an outlet to creative pilots who have a great eye and skill as drone operators." said Hogg. "And we wanted to make that epic aerial footage available to as wide an audience as possible."

The site was in "beta" testing for over a year, with its official launch at InterDrone2016 in Las Vegas. Hollywood connections and other creatives gave guidance on clips and the site itself. Duff, who leads the tech team said, "We built DroneStock with lots of input from experienced filmmakers, editors and producers. It's important that the people who buy our stock footage have a great experience."

The site offers exclusive aerial content by some of the top drone operators from all over the globe. You've likely already seen their work in your favorite TV shows and Films. The site has thousands of aerial clips with unmatched views of some of the world's most beautiful locations. Hogg said “There is amazing creative potential with this technology. We want people to think of that when they hear the word 'drone'."

With rigid policies against privacy and safety violations, DroneStock could help bridge a gap. They look to help foster creative uses and artistic potential. This could be how a hyper-growth tech field can find its way past our current fears and into our creative fiber. Visit DroneStock.com today and find out for yourself.