Dr. KA Paul, Global Peace Initiative President and the Indian President Pranab Kumar Mukherjee Calling the World to Celebrate Christmas and Promote Peace Among All People of All Faiths 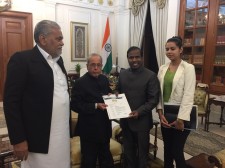 Dr. KA Paul briefed President Mukherjee, saying that there are unnecessary wars all over the globe that have created 65 million refugees, including millions of orphans and widows, and it is time for President Mukarjee, as a father of India today, to take the lead from Gandhi’s land, and to join Dr. Paul who is considered a modern-day Gandhi, tirelessly working for over three decades to stop wars and promote peace all over the world.

President Mukherjee then called Major Gaurav Arya and asked him to plan a stream a global Christmas message from him and Dr. Paul, calling on world leaders and the entire world to observe Christmas Day to promote peace, equality and justice for all people of all faiths.

President Mukherjee also confirmed a visit to Dr. Paul’s Charity City, to speak to the world from the orphanage and Peace Center.

Where: Constitution Club of India, Rafi Marg, New Delhi, Delhi 110001, and to all the nations of the world.

Why: To celebrate Trump's victory through global Christmas celebrations.

For more details to join a live visit on our website www.Globalpeacenow.com.

Mission of St. Francis Finds Innovative Idea for Church Fund Raising
The Mission of St. Francis has found an innovative way to raise funds during these poor economic times. It teamed with a real estate firm to raffle a luxury home and it keeps 100% of the proceeds beyond the cost of the home.
Lion Consulting - Nov 5, 2010
Newswire