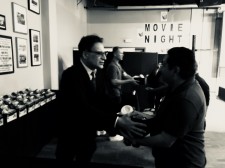 MIAMI, June 18, 2018 (Newswire.com) - Heal the Earth Joins Miami Rescue to Feed the Homeless on Father’s day! Dr. Farshchian feeding the homeless courtesy of Heal the Earth through the Arts Foundation. Miami is a major center, and a leader in finance, commerce, culture, media, entertainment, the arts, and international trade. According to Miamigov.com, “In 2012, Miami was classified as an 'Alpha−' level world city in the World Cities Study Group's inventory. In 2010, Miami ranked seventh in the United States and 33rd among global cities in terms of business activity, human capital, information exchange, cultural experience, and political engagement. According to a 2009 UBS study of 73 world cities, Miami was ranked as the richest city in the United States, and the world's seventh-richest city in terms of purchasing power."

Metropolitan Miami is also a major tourism hub in the southeastern U.S. for international visitors, ranking number two in the country after New York City. However, Miami does experience the problem of homelessness. According to Miamigov.com, 31 percent of the total unsheltered population, 17 percent of the total sheltered population, and a total of 25 percent of the total homeless population of Miami-Dade County are experiencing chronic homelessness. Many of these people are fathers. Imagine how heartbreaking for a father to be homeless and could not provide for their family? Dr. Farshhcian met with the many fathers at the Miami Rescue Mission to cheer them up and give a helping hand. Father’s day at The Miami Rescue Mission was a fun movie night thanks to all the organizers participating, including Dr. Farshchian.

We are very proud to be contributing to our community through Miami Mission rescue and showing the homeless fathers out there that there is hope and we care!

In the summer of 2017, inspired by Michael Jackson's Philanthropic work with Heal the World charity organization; Farshchian created a similar concept called "Heal the Earth through the Arts". This charity holds telethons live on Facebook; the telethons help to raise money for the homeless in Miami. Dr. Farshchian has stated in several interviews that this is his way of giving back to his community and continuing Michael Jackson's legacy Since 2017, Heal the Earth through the Arts, Inc. was formed to stimulate, promote and develop the interest of the general public in the arts, specifically by bringing the arts to areas and population centers that are not adequately served. It will also be a platform for up and coming artists to showcase their “arts” and help fundraise awareness about the environment, the Arts, and the Earth. Funds raised will then be awarded to chosen charities like The Miami Rescue Mission for the Homeless, among others.

Since 1922 the Miami Rescue Mission | Broward Outreach Centers, The Caring Place, has served the homeless and needy of South Florida. Our Broward Outreach Centers were first established in 1992. Our Miami-Dade and Broward Centers serve over 1,300 men, women and children each day. There are approximately 800 people enrolled in our residential life-changing programs. At the heart of these decades of serving those in the greatest need are our core values.

According to the Miami Herald, the Miami Dade Homeless Trust released its annual "point in time" count in February 2016, showing that countrywide, the number of both sheltered and unsheltered homeless is up two percent.

Earlier today, the spokesman for Heal the Earth, Mr. Bernardo Lessa-Bastos said, “We are very proud to be contributing to our community through Miami Mission rescue and showing the homeless fathers out there that there is hope and we care!”

Heal the Earth through the Arts Foundation

Source: Heal The Earth Through the Arts Foundation

The AAOSCP is an organization created to advance the research and development of therapeutics in regenerative medicine, including diagnosis, treatment, and prevention of disease related to or occurring within the human body. Its aim is to be an educa