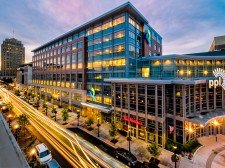 The winners, each of which demonstrates an innovative, forward-looking approach to design and development, include eight projects in the United States, two in Canada, one in Europe and two in Asia. The Downtown Allentown Revitalization District is the only winner in Pennsylvania and one of just two in the Northeast United States.

"Receiving the ULI Global Award for Excellence is proof that the NIZ is doing exactly what it was created to do," said Senator Pat Browne. "The NIZ incentives have turned a severely challenged downtown into one that is benefiting not only the entire Lehigh Valley but the Commonwealth of Pennsylvania as well. The ongoing revitalization of Downtown Allentown serves as a world model of what can be achieved through public incentives combined with private investments."

"Receiving the ULI Global Award for Excellence is proof that the NIZ is doing exactly what it was created to do," said Senator Pat Browne. "The NIZ incentives have turned a severely challenged downtown into one that is benefiting not only the entire Lehigh Valley but the Commonwealth of Pennsylvania as well. The ongoing revitalization of Downtown Allentown serves as a world model of what can be achieved through public incentives combined with private investments."

The Downtown Allentown Revitalization District was spurred by an innovative state law that created the Neighborhood Improvement Zone (NIZ). The anchor of the revitalization is a city block containing PPL Center, a 10,000-seat multipurpose arena, with an integrated mixed-use development including retail, dining, health/wellness, hotel, commercial office, two historic buildings and structured parking. Following significant initial public investment in the Arena Block, additional investment by private developers has reversed Allentown’s decline and transformed it into a sought-after destination to live, work and play. Since its completion in 2014 by the Allentown Neighborhood Improvement Zone Development Authority, the Arena Block redevelopment has been the catalyst for extensive additional private development, led by City Center Investment Corp.

“Allentown’s comprehensive approach to urban development ensured that the long-term success of the project would not be compromised,” said 2017-2018 Global Awards Jury Chairman Wendy Rowden, president of 42nd Street Development Corp. in New York City. “Each of these winners demonstrates a thoughtful, innovative approach to urban development that is adding to the sustainability and livability of the communities in which they are located. The attention paid to project detail, flexible design, and neighborhood context were among the factors making these entries stand out. They represent the type of development that will withstand the tests of time and change.”

“Cities are about people—the way we interact, get around, and go about our daily routines. Great cities are made of great places that make the urban experience easy and enjoyable,” said ULI Global Chief Executive Officer Patrick L. Phillips. “These projects reflect the highest standards of design, construction, economics, planning, and management. But most important, they are improving people’s quality of life.”

The Awards for Excellence program, established in 1979 and subsequently expanded to a global program, recognizes real estate projects that achieve the highest standard of excellence in design, construction, economics, planning, and management. Widely considered the centerpiece of ULI’s efforts to promote best practices in real estate development, the program recognizes the full development process of a project, not just its architecture or design. The criteria for the awards include leadership, contribution to the community, innovations, public/private partnerships, environmental protection and enhancement, response to societal needs, and financial viability. More information about ULI’s Awards for Excellence program and previous winners is available here.

About the Urban Land Institute
The Urban Land Institute is a nonprofit education and research institute supported by its members. Its mission is to provide leadership in the responsible use of land and in creating and sustaining thriving communities worldwide. Established in 1936, the institute has more than 40,000 members worldwide representing all aspects of land use and development disciplines. For more information, visit uli.org.

Allentown, Pennsylvania’s Neighborhood Improvement Zone (NIZ) is overseen by ANIZDA. The authority is a public instrumentality of the Commonwealth of Pennsylvania authorized pursuant to the Economic Development Financing Law. It is governed by a nine-member board of directors and managed by an executive director. Board meetings are open to the public. ANIZDA financed, developed and owns the PPL Center, the 10,000-seat arena that is home to the Lehigh Valley Phantoms, the AHL affiliate of the Philadelphia Flyers. The arena also hosts concerts, shows, NCAA basketball, arena football and community events. Development of the arena block has been the catalyst for hundreds of millions of dollars in additional private real estate development, funded in part through ANIZDA utilizing the powerful financing tool available only in the NIZ.