Don't Be Afraid: Be an Artichoke Adventurer

Ocean Mist Farms, largest grower of artichokes in the North America says DON'T BE AFRAID: BE AN ARTICHOKE ADVENTURER Whether you've cooked artichokes before or never tried, we want to see your culinary prowess 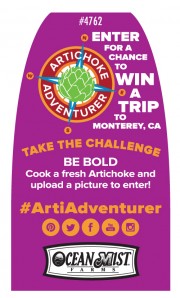 Castroville, CA, March 16, 2016 (Newswire.com) - Research shows that some people are intimidated by eating artichokes, but hopefully not the adventurous who will enjoy the fresh vegetable that is all heart.

This spring Ocean Mist Farms, the largest grower of fresh artichokes in North America, is inviting home cooks to Be an Artichoke Adventurer.

“We want to help people overcome their artichoke fears by encouraging them to be bold and adventurous,” said Diana McClean, director of marketing. “We want to encourage people, specifically Millennials, who have never tried or prepared a fresh artichoke, to do so. At the same time, we want to celebrate our loyal fans by allowing them to show off their artichoke culinary know-how.”

From March 20 to April 16, home cooks can upload a picture or video of themselves preparing or eating a fresh artichoke for a chance to win a trip for two to Monterey, Calif., including tickets to the Annual Castroville Food & Wine Artichoke Festival, June 4-5.  Entries will be judged on creativity of the photo or video, and how well it shows off the cook’s adventurous spirit. See official rules for entry requirements.

“We are engaging with people who love to cook,” McClean said. “Whether you’ve been a fresh artichoke fan for years, or have never cooked or eaten one, we want to see what you create.”

Spring is an ideal time to be an Artichoke Adventurer because it is peak season for the vegetable grown in mild climates along the coastline of the Monterey Peninsula in Northern California where Ocean Mist Farms family of farmers has been growing fresh vegetables for more 90 years.

Ocean Mist Farms, a fourth generation family-owned business and the largest grower of fresh artichokes in North America, is committed to delivering the highest standards in the industry for food safety, product quality, customer service, innovation a