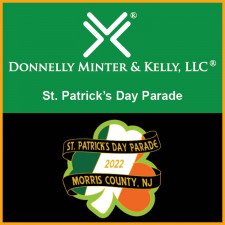 MORRISTOWN, N.J., March 3, 2022 (Newswire.com) - Donnelly Minter & Kelly, LLC, a Morristown, NJ, law firm, proudly announces its support of the 2022 Morris County St. Patrick's Day Parade as an Emerald Patron. The parade is scheduled to begin at noon on Saturday, March 12, rain or shine. The Firm welcomes the return of the parade after a two-year hiatus.

"We're excited to see the parade return to Morris County and to have the opportunity to show our support of the tireless efforts of the Parade Committee and the many volunteers whose hard work makes this event possible," said Patrick B. Minter, a founding partner of the law firm.

"We recognize the charitable contributions the parade makes to our community and are happy to champion this effort."

Donnelly Minter & Kelly, which also has offices in New York City and marks its eighth anniversary this March, is led by a team of nine partners, each actively involved in community and civic activities both in Morris County and throughout the State.

"We are happy that Mary Waller has another opportunity this year to serve as the Parade's Grand Marshall," said Patrick J. Galligan, also a partner at Donnelly Minter & Kelly. Supporting this annual tradition is especially gratifying for Messrs. Minter and Galligan, since both are natives of Morristown.

Ms. Waller had been named the Parade's Grand Marshall in 2020 before the event was canceled due to Covid. Born in Hudson County and currently residing in Long Valley, Ms. Waller has lived most of her life in New Jersey. She is an active member of the Irish American Association of Northwest New Jersey and the Morris County Parade Committee and volunteers with numerous other organizations throughout the State.

The parade first moved to Morristown from Wharton in 1991, having outgrown its original setting. Each year, thousands of spectators turn out to watch as 3,000-plus marchers, bands, floats, and fire departments wind their way along the parade route, which begins on South Street, and ends at Morristown High School.

Over the years, the parade has become a valuable resource for local charities, raising well over $350,000 in donations since it began in 1979. Organizations benefitting from the parade include those supporting children with special needs and programs that promote and enhance Morris County's Irish culture. A fully self-funded event, the parade receives its support through generous donations from corporate and individual sponsors.

"On behalf of the Donnelly Minter & Kelly firm, we welcome back the parade and wish everyone fair weather and a Happy St. Patrick's Day," concluded Mr. Minter.