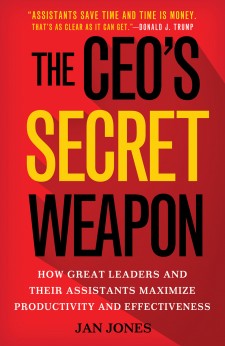 San Diego, CA, April 26, 2017 (Newswire.com) - The tradition began in 1952 as “Secretary’s Day” to recognize and celebrate the contributions of secretaries in the workplace. The word “secretary” is considered too limiting for the role today’s assistants play, so the terms “office professional” and “administrative professional” took its place.

There are 4 million administrative professionals in the workplace, according to a 2014 Bureau of Labor Statistics report. 97% are women. In 2015, the Bureau identified office and administrative support as the largest occupational group, making up nearly 16 percent of total U.S. employment.

Recent years have seen a massive effort to change the limited perception of the role of the assistant, particularly the role of the executive assistant, to more accurately reflect the nature of the projects they undertake as deputies and ambassadors for their executive. According to Jan Jones, in her book “The CEO’s Secret Weapon: How Great Leaders and Their Assistants Maximize Productivity and Effectiveness,” exceptional executive assistants are solution-oriented, applying their business smarts through strategic thinking skills, anticipation, resourcefulness and clear communication to operate as “a seamless extension” of the executives they support. No mean feat for the assistants of some of the executives she interviewed in her book, including current U.S. President Donald J. Trump, Steve Forbes, Richard Branson, Mitt Romney, Cisco Systems' John Chambers, who wrote the foreword to the book, and a host of other successful business executives. Jan herself served as a top executive assistant for almost 20 years, including as executive assistant to personal development guru, Tony Robbins.

Statistics show that there are more job seekers for the role of administrative professional than there are jobs, so one would expect the marketplace would be flooded with top talent for employers to have their pick. The exception to this is the job of high-level executive assistant, that highly-specialized individual who can make the executive more effective by expertly managing all their day-to-day affairs, freeing them up to focus on strategic activities essential to the success of the business. The best of this breed understands the business and the executive’s role so thoroughly, they are that “seamless extension,” acting as a “gateway” to the executive, facilitating communication and access for anyone who requires legitimate business access to their boss. This is the particular individual Donald Trump was referencing in his book, “How to Get Rich,” when he commented: “Ask God for a great assistant. A great one can make your life a whole lot easier – or, in my case, almost manageable.”

There is debate within the profession about whether Administrative Professionals Day is still relevant, or if reserving a special day for assistants is demeaning. But we have a Boss’ Day (October 16, 2017) to thank bosses for being fair and good supervisors, so why not thank assistants? Not unexpectedly, “Boss’ Day” was introduced by a secretary in 1958. Many assistants say that in preference to flowers and candy, something longer lasting, such as attending a professional development course, would be welcomed, and would benefit their executive long term as well.  It’s not too late to offer your assistant attendance at a future professional course of their choice, but many assistants say they appreciate the thought that comes with the flowers and candy as a nice way to say “thank you.”