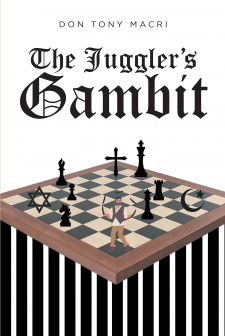 HUNTINGTON, W.Va., July 27, 2021 (Newswire.com) - Fulton Books author Don Tony Macri, a teacher, a garbage man, a marine carpenter, a bouncer, a wood carver, a juggler, has completed his most recent book "The Juggler's Gambit":  a thrilling and exciting narrative about the life of a juggler who gets caught in chaos during the time of religious conflict and scholastic advances, trying to fulfill his mission and attain freedom.

Don writes, "It is not an easy life for an English juggler in 12th-century Spain. Survival means juggling, not only his knives, but dancing nimbly between the clash of cultures of the sophisticated Moors who conquered the land centuries earlier, the Christians who stubbornly fight to take back Spain, and the inscrutable Jews who have made a home there for over a millennium.

"Despite their irreconcilable differences, the collision of the three cultures would produce Europe's highest civilization at the time and arguably the most preeminent in the world. When fate thrusts upon an itinerant juggler a secret that can change the world all three great cultures will stop at nothing to possess it.

"Will the street skills and cleverness acquired from a life on the road be enough for the juggler to accomplish his sworn mission and remain free?"

Published by Fulton Books, Don Tony Macri's book is a significant read that depicts the historical happenings in the 12th-century where clash of culture affected many lives. This is also a story of hope and determination to achieve freedom in life.

Readers who wish to experience this marvelous work can purchase "The Juggler's Gambit" at bookstores everywhere, or online at the Apple iTunes Store, Amazon, Google Play or Barnes & Noble.

Stella M. De Genova's 'The Light of the Moon and Big Brothers' is a Delightful Tale That Promotes a Deep Bond Between Siblings, and Introduces Children to a Vision Disability
Fulton Books - Sep 2, 2021

Denise Sampson's New Book 'The Great Gray Day' is a Sweet Story of Friendship Between 2 People Who Seem Different From the Outside but Are So Similar on the Inside
Fulton Books - Sep 2, 2021

Delby Diaz's New Book 'Tree of Life Decoded' is an Insightful Analysis on the Intrinsic and Essential Nature of the Tree of Life
Fulton Books - Sep 2, 2021
Newswire