Domino's New Book "Jake the Private Dick" is a Thrilling Mystery That Blends Murder and Voodoo Into a Delicious and Provocative New Orleans Detective Tale. 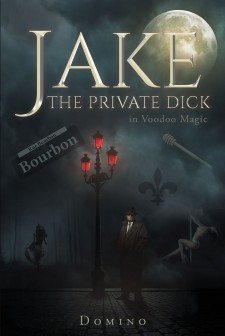 Houston, TX, March 23, 2018 (Newswire.com) - Domino, a proud matriarch-describes herself as a 'Seasoned-Senior-Diva' with attitude. She has five children, twenty-two grandchildren, and a number of great-grandchildren. Domino has completed her most recent book “Jake The Private Dick” in Voodoo Magic. A gripping and delightfully intricate mystery full of murder, voodoo, and suspense, all set in the French Quarter of New Orleans.

Published by Fulton Books, Domino’s book is a thrilling tale of one Hank Steel, a private investigator who was working overtime with his new ego, Jake the Private Dick. Jake and Hank had been assigned a major case, and the evidence led them to the Governor's estate. And the saga begins.

The choppers were right over his head, and the lights were looming through the trees.  He could clearly see the city of New Orleans. He headed toward the swamps to avoid being captured.  Johnny 'Maddog' Johnson would not go back to prison. The young man in the plaid shirt was in the process of dumping his latest victim in the swamps when he froze in his tracks. Murder and voodoo magic was in the air, and a serial killer was on the loose in New Orleans.

Canjun and creole aromas filled the air in the French Quarter, and the Honey Dripper was the hottest strip club on Bourbon Street. Willow, the owner, was dealing with another problem with a certain Lieutenant Frank Frazier in the back room. The egos start emerging throughout this mystery, and no one is safe. No one is who they say they are in this voodoo magic saga.

Readers who wish to experience this exciting and steamy work can purchase “Jake The Private Dick” at bookstores everywhere, or online at the Apple iTunes store, Amazon, Google Play or Barnes and Noble.