Does man who tattooed Manny Pacquiao on his stomach regret his decision after the loss?

A fan of Manny Pacquiao spends thousands of dollars, and 16 hours in a chair to honor his favorite boxer with a tattoo. Now that Manny lost, how does he feel? 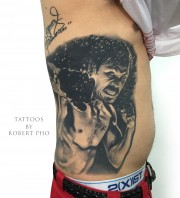 Las Vegas, NV, May 3, 2015 (Newswire.com) - To pledge his allegiance to Pacquiao, one local area resident decided to tattoo a portrait of Pacquiao on the side of stomach. But now that Manny lost, many are probably wondering how he now feels about the decision. Is there regret? Embarrassment?

We sat down with Anthony Agoncilio, the man who tattooed the portrait Pacquiao on him and we asked him a few questions and his responses were quite interesting.

A bad decision will strip a boxer of what they deserve, but it can never strip from the fans the inspiration we receive from them

​After Manny's loss, do you have any regrets about getting that portrait of him tattooed on you?

There is no regret at all. A bad decision can strip a boxer of a title but it can never strip from the fans, the pride, belief and support we have in them. Manny will continue  to be a champ for all those who truly believe in him and he's given so many of us inspiration and motivation in such a humble manner so there is no regret at all.

So are you saying that Manny should have won in the decision?

​​That's a tough one. I believe that Manny put up a fight, and that Floyd was trying out for the next season of Dancing with the Stars, but again there's no rules in boxing against dancing around. Boxing has changed, back in the day, it was more aggressive and people used to actually fight. So it leaves me in the middle.

As much as I would have loved for Manny to win, I think the only way he could have won was by knocking out Floyd. So who's to blame? Floyd for running around? Or Manny for not being able to catch him?  At the end of the day Floyd played within the legal rules of boxing and it may have not been an honorable win, but it's still a win. He'll have to live with that.

So are you saying that Manny fans shouldn't have been surprised by the fight results?

​Not really. I think real fans of boxing, and Manny, should have expected nothing less from Floyd. I think we were all just hoping that Manny would have caught him slipping and knocked him out.

Would you get another tattoo of Manny on you?

​If I were to find another image of him that caught my eye. I'd do it again with no hesitation. In the end, sports fans believe in their favorite teams or athletes because of how they make us feel. It's not always about who wins, it's about the pride they give us. Besides, what fun would it be to root for someone that always wins, the struggle makes it real and it's the thought of losing that gives us that adrenaline rush and sense of mystery and anticipation.

So are you saying that Floyd is boring because he's never lost?

​Not at all. He's a cocky dude that has pretty much backed up all his words. Again, we all expected him to run, and he didn't say otherwise so we shouldn't have been surprised. But even that element of Floyd possibly getting knocked out is what had even his fans in limbo. Besides, the guy has a mouth but that's all a part of the show. It's marketing.

Total time to get the tattoo: 16 hours

Size: The tattoo is over a foot tall.

Price: His response was "priceless"

Skin Design Tattoo is one of the largest and most highly coveted tattoo studios in Las Vegas, NV. Featuring some of the world's most respected, and award-winning black and gray tattooists, Skin Design has been in business for over 25 years.