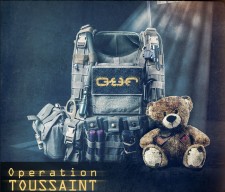 Ballard left his government job to dedicate his life to the fight against human trafficking, creating Operation Underground Railroad (O.U.R.) and recruiting other like-minded Special Forces operatives to join him in this crusade. Operation Toussaint follows Ballard and his team on an undercover mission to Haiti as they pursue a ring of sex traffickers and bring them to justice. Operation Underground Railroad’s missions have led to the arrests of hundreds of human traffickers and have rescued over 1,000 victims of human trafficking.

Before the age of 20, Ramy Romany, a native of Cairo, Egypt, currently living in Los Angeles, produced, directed, filmed and was featured in over 100 documentaries on Ancient Egypt for international networks including Discovery, History and National Geographic. Ramy was nominated for two Emmy Awards for his cinematography and won an Emmy for Best Cinematography for Visioneer.

Fundamental to Scientology is a humanitarian mission that extends to some 200 nations with programs for human rights, decency, literacy, morality, drug prevention and disaster relief. For this reason, the Scientology Network provides a platform for independent filmmakers who embrace a vision of building a better world.

The Scientology Network debuted March 12, 2018. Since launching, it has been viewed in 240 countries and territories in 17 languages. Satisfying curiosity about Scientology, the network takes viewers across six continents, spotlighting the everyday lives of Scientologists, showing the Church as a global organization, and presenting its social betterment programs that have touched the lives of millions. The network also showcases documentaries by independent filmmakers who represent a cross-section of cultures and faiths, but share a common purpose of uplifting communities.