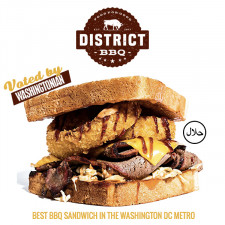 WASHINGTON, January 10, 2022 (Newswire.com) - Entrepreneur Ahmad Ashkar converts award-winning barbecue brand District BBQ to a complete halal quick service restaurant (QSR). After years of popular demand, the Washington D.C. metro is getting a halal barbecue smokehouse. With upwards of close to 500,000 Muslims currently living in the region, restaurateur and founder - Ahmad Ashkar says the decision to go halal in 2022 is easier than ever. "Halal is the new vegan. Consumers are demanding a more ethical, socially and economically aligned option, and that's exactly what halal offers. Muslim Millennials and Gen-Z are favoring halal options at a higher rate than their parents, and for the first time, thanks to national brands like The Halal Guys, we are seeing demand coming from outside the Muslim consumer market."

District BBQ will continue offering its signature sandwiches, including the District Z, named one of the region's top sandwiches by Washingtonian Magazine. The sandwich is filled with a quarter pound of thinly sliced brisket, stacked high on Texas Toast and topped with onion rings, slaw, American cheese and tangy barbecue sauce. Other crowd favorites include the Spicy Bama chicken sandwich, legendary Kansas City-style burnt ends, a two-pound chopped brisket stuffed baked potato, smoked wings and pulled chicken. The company has also introduced Peruvian-style, coal-fired halal chicken through its partner Chicken Pollo, and the early reviews could not be better. "Coal-fired rotisserie chicken is an insanely delicious, healthy and affordable alternative to traditional slow-smoked barbecue. With rising beef costs and supply chain shortages across the U.S., healthy, farm-raised halal chicken represents a booming market opportunity that is good for both consumers and business owners alike," Ahmad Ashkar goes on to say. Franchising for both brands is set to begin later this year.

You can learn more about District BBQ and place your online or catering order by visiting districtbbq.com or by heading to their Vienna location.

District BBQ is a halal barbecue brand offering in-house, hickory-smoked barbecue meats, fresh-made sides and coal-fired rotisserie chicken. Their sauces, rubs and signature burnt-ends are sold around the country. The brand was founded by Ahmad Ashkar. Mr. Ashkar is a Palestinian American entrepreneur. He is the founder of multiple award-winning brands in food and beverage, education, technology and real estate. Fast Company has called out Ashkar for having created, "One of the World's Most Innovative Companies" appearing in their 2019 ranking. He is a member of the Esquire 100 and has been ranked on The Gulf Business "Top 100 Most Powerful Arabs" power list. His restaurant brands have been featured by USA Today, Yelp! and BuzzFeed and included in the "Top Restaurants in America" rankings. He is the author of two books and is an avid traveler. He resides between Los Angeles and Washington, D.C. with his four children and is married to his college sweetheart.