Dick Stewart's New Book "ROCK & ROLL DURING A TIME OF INNOCENCE: Then Along Came the Pill, the Draft, the Computer and the British Invasion" is a Fascinating and Powerful Autobiographical Work

Recent release "ROCK & ROLL DURING A TIME OF INNOCENCE: Then Along Came the Pill, the Draft, the Computer and the British Invasion" from Page Publishing author Dick Stewart is an intricate and compelling story of the author's early life through the 1940s, '50s, and '60s. 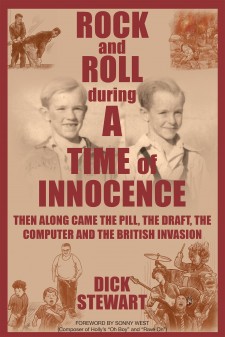 Santa Fe, NM, May 24, 2017 (Newswire.com) - Dick Stewart has completed his new book “ROCK & ROLL DURING A TIME OF INNOCENCE: Then Along Came the Pill, the Draft, the Computer and the British Invasion”: a gripping and potent first-hand account of the birth of rock 'n' roll and the transformation of music and culture.

Published by New York City-based Page Publishing, Dick Stewart’s exciting tale provides the reader with a historical account of the early rock 'n' roll movement in music and the lead up to it. Stewart’s story provides readers with perspective and insight into the last era of innocent freedom.

Richard Stewart is one of those large numbers of fanatical early ’60s rock-and-roll guitarists, who never received national attention and all its glory but, instead, came darn close regardless of the frequent and, on occasion, precarious roadblocks that he encountered, especially during the innocent years of early rock 'n' roll. He endured excessive corporal punishment at school and at home; he explored and mapped privately owned lots in which he and his neighborhood preteen gang members built forts; he was a Pachuco in a Hispanic gang while in high school; he witnessed despicable bigotry toward Native Americans, Mexican Americans, and African Americans; he fought forest fires in the Pacific Northwest, one of which nearly took his life; he suffered extreme hazing at the hands of his Kappa Sigma active brothers at the University of New Mexico; and the arrival of the Beatles in America dashed his dream of having a national, rock 'n' roll guitar instrumental hit.

Stewart’s experiences from the moment the Second World War ended in 1945 to the beginning of the psychedelic rock period in 1967 are just too powerful, suspenseful, historic, excruciating, humorous, scary, and on occasion, downright life-threatening that need to be told in detail.

Readers who wish to experience this gripping work can purchase “ROCK & ROLL DURING A TIME OF INNOCENCE: Then Along Came the Pill, the Draft, the Computer and the British Invasion” at bookstores everywhere, or online at www.lancerecords.com, the Apple iTunes store, Amazon, Google Play or Barnes and Noble.

For additional information or media inquiries, contact Page Publishing at 866-315-2708.

Page Publishing is a traditional New York based full-service publishing house that handles all of the intricacies involved in publishing its authors’ books, including distribution in the world’s largest retail outlets and royalty generation. Page Publishing knows that authors need to be free to create — not bogged down with complicated business issues like eBook conversion, establishing wholesale accounts, insurance, shipping, taxes and the like. Its roster of authors can leave behind these tedious, complex and time-consuming issues, and focus on their passion: writing and creating. Learn more at www.pagepublishing.com.

Tags: Dick Stewart, New Books, Page Publishing, ROCK & ROLL DURING A TIME OF INNOCENCE: THEN ALONG CAME THE PILL, THE COMPUTER AND THE BRITISH INVASION, THE DRAFT

Page Publishing is a New York based full-service publishing house. We handle all of the intricacies involved in publishing your book, getting it onto bookstore shelves and generating your royalties.

Author Anthony S. Luciano Raimondi's New Book 'When the Bullet Hits the Bone' is a Compelling Reflection on His Childhood and Career in a Notorious New York Crime Family
Recent release "When the Bullet Hits the Bone" from Page Publishing author Anthony S. Luciano Raimondi is a fascinating inside glimpse of life in what is now referred to as the Colombo crime family. From the homemade pasta dinners at his mother's table to spending time with his uncle Lucky Luciano, this memoir is a rare account of the human characters in a notorious Mafia crime syndicate.
Page Publishing - Feb 13, 2020