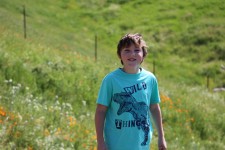 Madison, Virginia, August 8, 2016 (Newswire.com) - ​On August 10, Harley Frost, 11 year old son of Brent and Shannon Frost, of Bakersfield, California, will be welcoming into his home and heart a Labrador Retriever named “Rocky.”  The dog is being provided by Service Dogs by Warren Retrievers, a non-profit organization based in Virginia, with a mission to provide specially-bred and trained dogs for adults and children with invisible disabilities like Autism, PTSD, Seizure Disorders, or in the case of Harley—Type 1 Diabetes. Harley’s dog has already received thousands of hours of training as a diabetic alert dog and it will continue to learn under the careful guidance of a certified trainer from Service Dogs by Warren Retrievers and through the rapport it develops with Harley and his parents.

At the young age of 6, Harley was diagnosed with Type 1 diabetes.  “He had been sick for a couple of days, extremely tired and thirsty,” says his mom Shannon, “and he told us he felt like a camel in the middle of the desert.”  Harley’s blood glucose was extremely high and he was in “DKA”—diabetic ketoacidosis, a life-threatening complication of diabetes.  Harley was hospitalized for six days.   In the five years since the diabetes diagnosis, Harley and his family have had to face the daily challenges associated with the disease.

Life is about to get a whole lot better for Harley!

The Frosts, like other parents of children with Type 1 diabetes had to quickly learn how to care for their son.  “We were overwhelmed,” says Shannon, “words like test meters, lancets, basal rates, A1C level, test strips, CGM; and what was even worse was knowing we had to give multiple daily shots to Harley and prick his finger ten to 12 times a day to check his blood glucose level.  Every time Harley ate or drank, we had to calculate carbohydrates and give Harley a shot of insulin to cover it.”

In March of 2012, Harley was placed on an insulin pump.  “Instead of getting shots about ten times a day, the pump delivers the insulin through a tube inserted into Harley,” adds Brent Frost, “we thought it was great that we wouldn’t have to give Harley so many shots.”  However, one night the pump failed and Harley received no life-saving insulin.  “By 6 a.m. that morning, Harley was violently ill and we had to make another trip to the hospital to get his glucose levels back to normal,” says Brent.  It was then that the Frosts made the decision to obtain a diabetic alert dog for Harley.  “The insulin pump is a machine—we know it can fail and we can’t trust it 100%,” says Shannon, “and with Harley being unable to recognize his glucose highs and lows we knew we needed help.”  Now with the arrival of the diabetic alert  service dog, Rocky, the Frost’s will have another tool, a four-legged one that will alert to Harley’s blood glucose levels.

Dan Warren, Founder and President of Service Dogs by Warren Retrievers, indicates that the Organization’s diabetes alert dogs are trained to recognize and alert on the scent of low and or high blood glucose levels. “When Harley’s blood sugar begins to fluctuate, Rocky will pick up the scent and give the alert for ‘high’ or ‘low’ blood glucose levels to Harley’s parents—and even to Harley.”  During a recent study conducted by the American Diabetes Association, the University of Virginia, and Service Dogs by Warren Retrievers it was concluded that Warren Retriever’s service dogs are 93% accurate in their alerts.  (April 2013 edition of Diabetes Care created by the American Diabetes Association).

Often diabetics don't feel their blood sugar fluctuation and their bodies are slow to react to how their insulin pumps have been programmed. These events can lead to dangerous lows, which can result in seizures, coma, and even death. Implanted glucose monitoring systems (“CGM”) are often 20 minutes behind an alert dog’s sense of the glucose movement (from April 2013 study by University of Virginia utilizing Warren Retrievers’ service dogs).  Electronic systems measure parts per million while alert dogs have been shown to scent parts per trillion.

People may also sleep right through a glucose monitor's alarm, whereas a trained diabetes alert dog is taught to be persistent to the point where it will go get another member of the household if the dog’s “person” does not respond. Additionally, these amazing dogs are trained to retrieve essentials needed such as Glucose tablets, Glucagon, insulin, juice boxes, testing meters or retrieve medication from a designated spot in the house. Alert dogs are further trained to dial out on K-9 equipped phones to summon emergency medical help, if needed.

Harley’s dog will also work with the SDWR trainers and the Frost family towards public access certification.  Dan Warren is quick to point out that, “all the incredible services these dogs can provide are through progression, hard work and dedication of the Organization and the family who must work together to build on training foundations and fundamentals.  This is about an 18-month training program.”

What sets SDWR apart from other service dog organizations are the customized training methods and SDWR matches dogs to their “person.”  According to Dan Warren, “that important bonding time between dog and person can begin to happen right away.  For the seven years we’ve been utilizing this method of dog placement, we’ve achieved amazing results.  To date we have 500 dogs working across the country and around the globe.”

These life-saving service dogs are not inexpensive and Service Dogs by Warren Retrievers survives like other non-profit service organizations on donations. As many as three million Americans have Type 1 Diabetes and each year, more than 15,000 children, approximately 40 children per day—are diagnosed with Type 1 Diabetes in the U.S. “We wish we had the funds in place to give a dog to every child who wants a beautiful little companion that can also serve as an amazing diabetes management tool.  Right now, we have over 400 families waiting to receive their service dog from us,” says Dan Warren, “So contributions are vital to our mission which is ‘until there’s a cure, there’s a dog.”  Donations can be made by going to www.sdwr.org and simply following the steps to make a donation.