Denver to join prestigious group of large maker festivals around the world, serving as a new hub for maker movement October 14 & 15, 2017 a 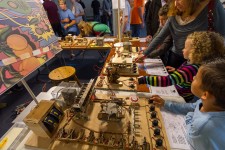 Denver, CO, April 12, 2017 (Newswire.com) - The Colorado Maker Hub, a non-profit organization committed to celebrating the Maker Movement by connecting and educating Colorado makers, announced today that Denver has been selected to host the first Feature Maker Faire in the Rocky Mountains and surrounding states on October 14-15, 2017, at the Denver Mart. More than 150 cities around the world currently participate in Mini Faires to promote the Maker Movement, and Denver will join the esteemed group of 20 cities to host a Feature Faire such as Paris, Rome, Tokyo and Atlanta.

Maker Faire Denver is an all-ages festival that inspires, educates and entertains, propelling ideas into reality and passing curiosities into amazing creations. Makers come from all over the U.S. to share their cutting-edge inventions and artistry, as well as teach their craft to attendees—from woodworking to robotics. Colorado has hosted seven Mini Maker Faires since 2013, with as many as 4,000 attendees and 148 makers.

"At Maker Faire Denver, visitors have the chance to glimpse into the future, get hands-on in the creation process and leave with a renewed excitement for what's possible. Maker Faire inspires young and old alike to catch that spark of wonder, to mix it with tools, technology, and techniques to bring that inspiration to life."

“At Maker Faire Denver, visitors have the chance to glimpse into the future, get hands-on in the creation process and leave with a renewed excitement for what’s possible,” explains Elise VanDyne, Executive Director of the Colorado Maker Hub. “Maker Faire inspires young and old alike to catch that spark of wonder, to mix it with tools, technology, and techniques to bring that inspiration to life.”

The graduation to a feature event means more awe-inspiring exhibits from makers around the country. The 2017 Maker Faire Denver aims to further accelerate the Maker Movement in this part of the U.S. and will feature hundreds of exhibitors, hands-on workshops and presentations with the sort of crazy twists one can only expect from a Maker Faire:

And including other Faire favorites such as the Human Foosball table, Pokey the Fire Breathing Dragon, and the NerdyDerby.

Lead sponsors for the event include Sparkfun, Denver Office of Economic Development and Epilog Laser. The Colorado Maker Hub independently produces the Maker Faire Denver in collaboration with Maker Media.

“In JumpStart 2017, our annual strategic plan for economic development in Denver, the Office of Economic Development (OED) is intentional about supporting makers spaces—collaborative work spaces open to entrepreneurs of all ages who want to explore advanced digital design and manufacturing technologies. The Maker’s Faire in Denver this fall is a perfect example of bringing creative makers and innovators together,” said Turid Nagel-Casebolt, OED director of Business Development.

Want to participate in Maker Faire Denver? We are a scrappy and fun team of makers, volunteers, and much appreciated sponsors that make it all happen.  Find your tribe and come join us!  Sign up on the website link above.

Maker Faire is the Greatest Show (and Tell) on Earth – a family-friendly showcase of invention, creativity and resourcefulness, and a celebration of the Maker Movement. It’s a place where people show what they are making, and share what they are learning. Makers range from tech enthusiasts to crafters to homesteaders to scientists to garage tinkerers. They are of all ages and backgrounds. The aim of Maker Faire is to entertain, inform, connect and grow this community.

The original Make Faire event was held in San Mateo, CA, and in 2014 celebrated its eleventh annual show with some 1100 makers and 130,000 people in attendance. World Maker Faire New York, the other flagship event, has grown in four years to 600+ makers and 80,000  attendees. Kansas City, Detroit, Atlanta, Milwaukee, Orlando, Silver Spring, Paris, Rome, Oslo,Trondheim, Tokyo, Newcastle (UK), and Shenzhen – and now DENVER - are the home of larger-scale “featured” Maker Faires and over 120-community-driven, independently organized Mini Maker Faires are now being produced around the United States and the world.

Colorado Maker Hub is an alliance of makers, businesses, and organizations that grow the maker ecosystem - builders of the innovation economy in education, invention, entrepreneurship, manufacturing, creative industries, technology and more