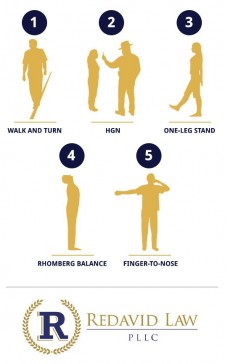 Miami, FL, December 8, 2016 (Newswire.com) - Miami DUI attorney Jordan Redavid urges people to be prepared in case they find themselves being investigated for Driving Under the Influence (DUI) in Florida. Police officers routinely ask DUI suspects to perform field sobriety exercises or tests. The decision to take or refuse such tests, and one’s performance of them, are crucial to any DUI investigation and subsequent prosecution.

“These tests are important because police officers use them to determine whether or not a person will be arrested for DUI. They also play a key role if your case goes all the way to a jury trial,” said Redavid. “Even the smallest mistake can be held against the suspect. As a result, it is helpful to know what to expect in such situations, what the police are looking for and how you can pass the tests.”

The Walk and Turn is the most commonly administered DUI field sobriety exercise. It involves walking nine steps on a straight line while constantly touching heel-to-toe. Then the suspect must turn in a specific manner using small pivot steps before walking nine steps along the line back to the starting point.

Authorities use very strict standards to evaluate a person’s ability to perform DUI field sobriety tests correctly. The police officer will give a series of instructions and demonstrate what is expected for each exercise.

Redavid advises waiting for the police officer to indicate when to begin the exercise, as following directions is a critical part of the test. Failure to do so can be misinterpreted by the authorities as a sign of impairment. Prosecutors may paint the suspect’s inability to listen to instructions in a negative light before the jury.

“The better prepared you are, the more likely you are to perform well on the tests without feeling anxious or overwhelmed,” said Redavid. “An experienced DUI defense attorney will know how to use the field sobriety test results to your advantage in a case.”