Deeply Inspired by the Women's March in D.C., Artist Alana Rae Shatkin Captured the Voices and Spirit of Those in Attendance by Creating a Beautiful Painting

Alana Rae took up her brush and canvas and allowed inspiration from this unprecedented demonstration of togetherness, during what seemed to be the most divided moment in our nation, to capture America's true beauty. 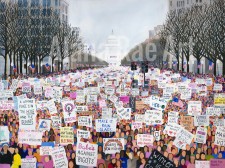 FORT LAUDERDALE, Fla., October 3, 2018 (Newswire.com) - ​​​Artist Alana Rae Shatkin was stunned by the outcome of the 2016 election and devastated. It was not until she witnessed people at the Women’s March on Washington, D.C., that she regained optimism.

Alana Rae Shatkin experienced the frightening disbelief of millions of people around the world following the outcome of the election. She recalls the following morning when she arrived at work, a nonprofit organization serving disadvantaged youth, tearfully empathizing with her coworkers.

They told me I could be anything, so one day I quit my job and turned my life-long passion into a new career. Some days I wake up terrified, but mostly I am filled with gratitude that I get to set up my easel and do what I love.

In her own words, “For the first time, our country elected someone who openly made misogynistic and overall prejudiced remarks against people of different ethnicities, income brackets, religious beliefs and sexual orientations. He created a platform for more Americans to spread messages of hate and they quickly took to social media to share their bigotry. It felt to me as if a dark cloud had enveloped the country.”

Though unable to attend the Women’s March in Washington, D.C., Alana Rae was inspired by the sheer volume and diversity of people who shared her alarm at the state of the nation.

The estimated attendance for the Women’s March was half a million people in D.C. alone, while cities across the country and people all around the world picked up their signs and marched in peaceful protest. Alana Rae Shatkin attended her local march and following the coverage of the outcome in D.C., realized there were thousands of people who shared her conviction to shine a light on the issues that matter, including human rights, women's rights, environmental protection, immigration reform, racial equality, LGBTQ rights, reproductive rights and healthcare reform. She felt she needed to do something to honor this event.

With no formal training in art, Alana Rae Shatkin was inspired to create a new piece in honor of the Women’s March.

Alana Rae took up her brush and canvas and allowed inspiration from this unprecedented demonstration of togetherness, during what seemed to be the most divided moment in our nation, to capture America’s true beauty.

​Alana Rae is happy to pursue her dreams. "They told me I could be anything, so one day I quit my job and turned my life-long passion into a new career. Some days I wake up terrified, but mostly I am filled with gratitude that I get to set up my easel and do what I love."

Alan Rae saw courage in the faces and actions of the protesters and wanted to capture the unique and undeniable beauty of diversity to show her support of those who marched against the dwindling respect of equal rights in America. Having dabbled in landscapes and her interpretation of local Florida landmarks like Bonnet House in the past, this passion project felt like the best way to connect with those who marched and to give back to those who fight for everyone.

In a sea of all tones of skin color and numerous messages on the signs present during the Women’s March, her painting is nothing short of stunning. Against the harsh backdrop of a gray, winter day and the stark, bright glare of the White House, a kaleidoscope of diversity in action brings to life the genuine heart of the nation.

Alana Rae Shatkin was again inspired by the leadership and resilience of the students who organized the March For Our Lives event in Florida after she attended.

Communities in Florida banned together after Valentines Day of 2018 to advocate for common sense gun laws. Having grown up and attended public schools in Broward County and known people who have kids who attended Parkland, Alana felt a connection to the community and their cause.

Her need for activism sparked once more, Alana took to her canvas to bring attention to the march she attended. She is young, at 25 years old, but she was amazed to see students almost a decade younger than her finding a national platform to make positive change. These students faced the unthinkable and let that become their motivation to advocate for gun reform. Painted in the same style as the Women’s March, she chose to leave the attendees faceless and use slogans that were present on the hand-painted signs carried by the young activists. 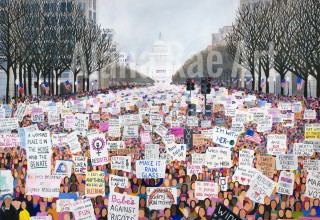 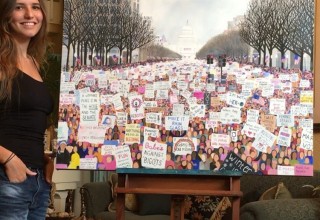 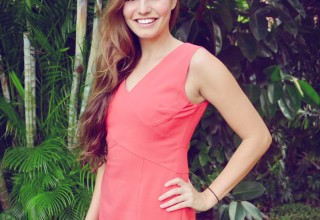 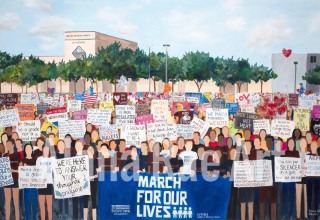 Using oil paint on canvas, vibrant colors, and varied brush strokes, I capture my perception of landmarks, landscapes, and beautiful moments in life.