Stand-up comedian, Travis Bone, announces release of his debut comedy album 'Life Before the Internet' featuring a live performance from Cincinnati, Ohio. 'Life Before the Internet' catches Travis doing what he does best, telling jokes and stories about his dogs, video games and growing up in the Midwest. The performance lasts sixty-six minutes and is available in various formats for download and purchase. Fans of Travis Bone's comedy will appreciate this collection of anecdotes and adult humor. 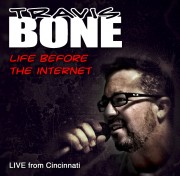 About Travis Bone
A long time ago, in a town surrounded by corn, well before Al Gore invented the Internet, a group of friends made it a normal social pastime to discuss and invent terms for sexual acts such as the "Angry Dragon", the "Cincinnati Taco Chop", the "Sunny Side Up", the "Poltergeist", the "Donkey Punch", etc, etc. Led by Travis Bone, the group of friends converted the drinking game into a full-time business. In 2001, GetOffended Inc was born at the height of the dot com explosion. For more than a decade they sold and distributed offensive and humorous t-shirts, posters, stickers and books all over the world. In 2012, GetOffended officially closed its doors. Former CEO, Travis Bone, was looking down the barrel at middle-age and refused to give up the dream. He continues to write, tell jokes and entertain through various pen names and social media networks.

In addition to performing stand-up, Travis is an award winning author and comedy writer. Using his chronic insomnia as an inspirational tool, he found early success in social media as well as print. In 2011 he broke the silence on his lifelong struggle with apeirophobia and began work on his first novel. Released in 2012, 'Lost in Infinity' marked his debut into the world of psychological fiction. In 2014, Travis released the follow up, 'Lost In Infinity: Deja Vu Redux'. Travis's humor and fiction has been featured in national publications as well as on the refrigerator in his mother's kitchen.

Contact Information
Travis Bone can be found at Twitter under his alias, @FinallyHeSleeps. For booking information, interviews, blog tours, guest posts or free review copies of 'Life Before the Internet' email apocalypsecomingpr@gmail.com.

Home of Travis Bone, comedian and author. 'Life Before the Internet: Live from Cincinnati' available now.