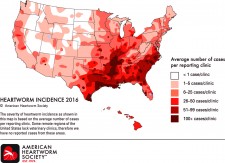 Wilmington, Delaware, April 28, 2017 (Newswire.com) - The bad news: the incidence of heartworm disease in pets is on the rise in the U.S., according to a recent survey by the American Heartworm Society (AHS). The good news: Heartworm disease is easily prevented, even in pets living in areas with the highest incidence rates.

The AHS announced the results of its triennial Heartworm Incidence Survey, along with unveiling a new heartworm incidence map based on 2016 data from veterinary practices and shelters across the country.

The average number of dogs diagnosed per clinic in 2016 rose by 21.7 percent over 2013 numbers when our last survey was conducted, says AHS president and veterinarian Dr. Christopher Rehm. “While the distribution of heartworm cases hasn’t changed dramatically since we surveyed veterinary practices three years ago, the average number of heartworm-positive dogs per clinic has increased.”

Approximately 24 percent of respondents to the AHS survey reported seeing more heartworm cases in 2016 vs. 2013, while 19.8 percent reported a decline in their practice areas.

No state in the U.S. is heartworm-free, according to the AHS survey, which revealed the top five states in heartworm incidence were Mississippi, Louisiana, Arkansas, Texas and Tennessee—all states that have been in the top tier since the AHS began tracking incidence data in 2001. Rounding out the top ten states were South Carolina, Georgia, North Carolina, Alabama and Florida. Among the top ten, only Alabama, Louisiana and Texas saw decreases in per-practice average heartworm incidence, while increases were noted in the other seven.

On a more hopeful note, reducing heartworm incidence is clearly in the hands of veterinarians and pet owners. Among veterinarians who reported a drop in heartworm incidence since the 2013 survey, almost two-thirds attributed the change to owner behavior, including increased use of heartworm preventives and, among those already giving preventives, using the medication year-round. Veterinarians who reported incidence increases in their practices area agreed; roughly half cited failure to give preventives, skipping doses or failing to give preventives year-round as contributing factors.

Other factors believed to contribute to incidence increases were weather conditions conducive to heartworm transmission in 2016 (heartworms are transmitted through the bite of infected mosquitoes) and the movement of infected dogs into practice areas.

“We see the results of the AHS Incidence Survey as a good news/bad news story,” says Dr. Rehm. On one hand, heartworm incidence has increased in a number of states, especially those states with a history of high incidence. On the other hand, veterinarians are telling us that there is a straightforward solution to this: (1) convince more pet owners to use heartworm preventives and (2) convince them to protect pets year-round—with no lapses.”

The AHS recommends year-round heartworm prevention for dogs, cats and ferrets. While dogs infected with heartworms can be treated, there are no approved treatment medications for cats and ferrets. Left untreated, affected pets may die, and those that do recover may suffer lifelong consequences due to respiratory and circulatory system damage.