Daymond John's Black Entrepreneurs Day Awards $250,000 in NAACP Grants to Black Businesses Across the US 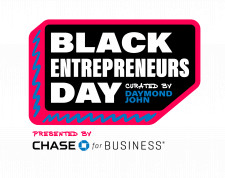 "Black Entrepreneurs Day was created on the premise that as business leaders and community figures, we had the opportunity to share our success through mentorship and conversations. I also understood that in order to both celebrate and support the Black businesses, it would take a solid commitment from like-minded individuals and corporations really putting in the work to make great change for the Black and Brown communities that they serve," said John. "The quarter-million dollars in grants that we issued with the help of the NAACP were made possible by the exceptional brand partners who enthusiastically said 'yes' when I picked up the phone and told them about this idea."

Daymond continued, "Hosting this year's event at the legendary Apollo was a coming of home of sorts for me. I grew up in New York, and I started my business selling hats outside of the theater. So to be able to share my own entrepreneurship journey on that stage, to a full house, is really beyond measure. And being able to welcome in an inspiring group of friends and business leaders to amplify the message that with education and grit, you can turn failures into learning, and learning into success, is exactly what we aimed to accomplish."

Black Entrepreneurs Day, presented by Chase for Business, is a primetime special at the intersection of business and entertainment. The inaugural event in 2020 attracted over 7 million viewers and won two Webby Awards for the best Remote Business & Finance event on the internet. The 2021 event took place live from the legendary Apollo Theater in Harlem, NY.

The event is curated and hosted by Daymond John and produced in conjunction with Medium Rare and The Shark Group.

ReachTV Now Has Live Sports
● With NFL Exclusive Partnership to Distribute Games in Airports ● Deal is For Full Suite of Games for Regular Season, Playoffs and Super Bowl
RMG - Sep 29, 2021