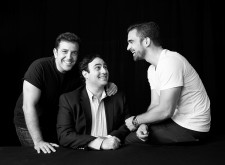 Motiv, a San Francisco-based venture that makes an award-winning smart ring, received a nomination in the Advertising, Media & PR Products and Services category. Their competitors in this category are Adidas, Uber, Google, and Project Muze (a collaboration between Google and fashion retailer Zolando).

What makes this nomination even more atypical is that Motiv's website was not produced by a large agency, but by a tight-knit coalition of up-and-coming creative professionals and boutique shops.

"It took a lot of sleepless nights, but we created a digital experience with the same feel and polish that the big agencies deliver," says Yanikian.

David Sperry, former principal of marketing consultancy, Mutant Unicorn, now VP of Brand and Marketing at Motiv noted that he originally reached out to Wiktor and his team because of their "visionary, modern aesthetic. I trusted them with bringing the Motiv brand from idea to reality and it paid off." Sperry notes that the team's work was singled out as one of the five best in the world in its category (and among the top 9% of all work entered).

As a nominee, Motiv is also eligible to win a Webby People’s Voice Award, which is voted online by fans across the globe. From now until April 20th, Motiv fans can cast their votes at voteformotiv.com

"We enjoy working with companies like Motiv that are trying to challenge the status quo because that's part of our DNA too. We're looking forward to earning the votes from all those who like supporting the underdog.” adds Soudjian.

Winners will be announced on Tuesday, April 25, 2017, and honored at a star-studded ceremony on Monday, May 15, 2017, at Cipriani on Wall Street in New York City. There they will have an opportunity to deliver one of The Webby Awards’ famous 5-Word Speeches. Past 5-Word Speeches include: Steve Wilhite’s “It’s Pronounced “Jif” not ‘Gif’; Stephen Colbert’s “Me. Me. Me. Me. Me.”; and Björk ‘s “A E I O U.”

About Motiv: Founded in 2013 and based in San Francisco, Motiv Ring is the first highly advanced wearable device that changes the way people measure activity and sleep. The Motiv Ring won Best of Innovation at the 2017 Consumer Electronics Show. For more information, see http://mymotiv.com.

About Dirango: Consisting of engineers and developers, Dirango specializes in creating websites for a diverse array of clients, from startups to public agencies. For more information, see http://dirango.com.

About Mutant Unicorn: A collaborative marketing consultancy consisting of designers, developers and strategists with a passion for building unique product experiences. They exist to help brands grow by understanding, attracting, and connecting with their people. For more information, see http://mutantunicorn.com ​