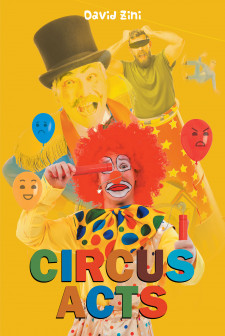 MAPLE LAKE, Minn., December 2, 2021 (Newswire.com) - Fulton Books author David Zini, an avid fan of mystery/thriller novels, has completed his most recent book "Circus Acts":  a gripping novel that follows the life of a sociopathic professor who has his own odd ways of obtaining justice. As the federal government fails to protect its people, one man takes the law into his own hands. Professor Kendrick Laberday is after the criminals who are responsible for the money he has lost. The justice system that he created is oddly entertaining and twisted. Are you ready to have fun in his circus?

Zini shares, "Was your pocket 'picked' during the Great Recession of 2008? Did you take a hit on your savings or retirement or maybe even lost your home? Ever wonder how that could happen? Ever thought about getting revenge on those who snatched your purse strings? Well, where our federal government failed to protect its citizens from such outright theft, Professor Kendrick Laberday is more than happy to take up the slack. In his unique and most deadly brand of justice, the disarmingly charming but violently sociopathic professor is intent on dispatching in a very public manner those who he believes played a part in stealing his money. The courtroom? Very public settings, as the point is to try these criminals in front of the good citizenry of our country. The judge and jury? Kendrick will be happy to handle those duties. The punishment? To say the least, unique and administered in a way that only the dark mind of Kendrick could configure. The thrills and chills of these strange high-wire acts can be found in only one circus. Welcome, all, to Professor Kendrick Laberday's Circus of Justice.

"Following the professor's deadly trail, which provides for more twists and turns than the Mississippi River, are Minneapolis Police Department investigators Mark Truitt and Sylvia 'Sylkie' Maune. The detectives have no idea what they're in for as the case becomes more puzzling the deeper they dig, even, at times, swerving too close to home. More and more ugly facts about the self-described 'ringmaster' bubble to the surface as the case deepens and push the investigators ever farther into the murky world of the professor's dark circus."

Published by Fulton Books, David Zini's book is a suspenseful thriller that sprawls on vengeance and justice. Follow along with the investigators as they go through hell and back trying to stop the violent professor from calling the shots.

It is an addictive story that one cannot stop reading.

Readers who wish to experience this engrossing work can purchase "Circus Acts" at bookstores everywhere, or online at the Apple iTunes Store, Amazon, Google Play or Barnes & Noble.

David Fankushen's New Book 'My GRANDPA Has SUPERPOWERS' is a Thrilling Story About a Grandpa Who Rescues His Grandchildren in Amazing Ways
Fulton Books - Dec 30, 2021

A.D. Plautz's New Book 'The Dreamer 4' is a Propulsive Novel About a Man Who Can See the Dreadful Future of His Loved Ones Through His Dreams
Fulton Books - Dec 28, 2021

deMichelle's New Book 'Off the Dance Floor' is an Insightful Journey Taking Its Readers to the World of Latin, Ballroom, and Nightclub Dance Community
Fulton Books - Dec 28, 2021