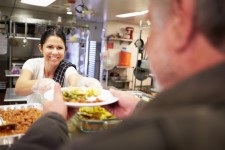 Miami, FL, June 7, 2017 (Newswire.com) - David Sanguesa of Miami, FL, has brought together food businesses across the city in a fundraising effort for the hungry, first responders, and veterans. Various local businesses, including coffee shops, donut shops, diners, restaurants, and more, have all agreed to take part. Anyone who purchases food or drinks from the participating stores will automatically also sponsor the various causes.

Sanguesa says: "We live in an 'us against them' society, in which people have become distrusting of corporations, blaming their greed and government support for the failings of society. I aim to turn this around by allowing community members and businesses within that community to work together to do something good for others."

Each of the businesses which have agreed to participate will donate $1 for every $5 purchase to various charities, particularly the local food banks, veteran support organizations, and charities supporting first responders. The businesses were given the opportunity to pick a specific charity, so that people would be able to decide where their money will go to as well.

Furthermore, in order to make sure that one charity is not unfairly favored over any other, Sanguesa has also organized the Red, White, and Blue Barbecue. This will be an afternoon event running into the evening, where local diners can come together to cook for the community at discounted prices, and where all the proceeds will be equally divided between the local charities and nonprofit organizations in Miami. The local media has proven to be particularly interested in this event and have advertised it far and widely in newspapers, radio shows, and even on television. Sanguesa adds: "I really can't thank local businesses and the local media enough. What started as a small idea has now spiraled into something much bigger and I couldn't be happier. This will really make a massive difference to people in the community."

Other types of organizations have also come forward offering help. These include peer counselors, service dog trainers, acupuncturists, and employment advisors. While they are unable to offer any financial contributions, they have worked together with Sanguesa to organize a third event in which people of the community can come together to utilize their skills. While this is, again, targeted at veterans, first responders, and those who require the food bank, those who are able to attend this event can improve their skills.

Sanguesa adds: "This third event is a perfect example of how things are spiraling and getting bigger and bigger. I started with the idea of being able to feed the most needy, and now I am at the point that I am thinking about their employment future, their hobbies, their health, and more."

Interestingly, a fourth event is now in the pipeline. Sanguesa has been contacted by public officials who have suggested making the "Red, White, and Blue" event more like a festival and one that, if successful, can be repeated on a regular basis. This came after they were contacted by a group of motorcyclists who suggested an unusual way of playing poker.

Motorcycle poker is a game in which passengers and riders take part, riding from one location to another to pick up playing cards. At the end of the day, they will be able to win a prize. The interesting part of this game is that, if they do not like one of their cards, they can swap it for a new one. As a result, nobody knows where a particular card would be.

"The motorcycle poker ride is just a bit of fun," adds Sanguesa. "We will charge a fee to take part and this money will go to the different nonprofits and charities. The winner of the poker game, meanwhile, will receive a year's free bike insurance courtesy of a local insurance firm."

Another idea is brewing in Sanguesa's mind, namely to organize some other events around the motorcycle ride, as few people can actually take part in it. Some of the activities he is currently looking into include an eating contest, an egg and spoon race, and other such fun activities.

The community is looking forward to the festival organized by Sanguesa, and they are keen to communicate with him about how they can get involved and how they can improve the outcomes of the event itself. One community member says: "Charity begins at home, and what David is doing there is right up our street. It is giving everybody the opportunity to come together and make a meaningful difference to those who need help the most."