How to save thousands of dollars a year by drastically cutting a home's carbon footprint. Written by someone who has done it. Payback in 6 years. 15% return on investment. 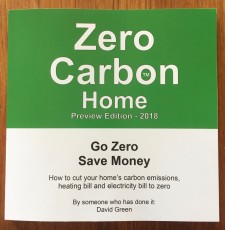 DOVER, Mass., December 19, 2018 (Newswire.com) - Recently, it’s been all bad news. The UN reported that we have 12 years to limit a climate change catastrophe of droughts, floods, and poverty. The U.S. warned that climate change would kill thousands and reduce GDP by 10% and the Camp fire in California was the deadliest in the U.S. in a century.

Now, the good news. Author David Green's new book, Zero Carbon Home, is the roadmap for how to make money by drastically cutting a home’s carbon footprint. By installing the “fab four” - heat pumps, insulation, triple-glazed windows, and solar panels on his own home in Dover, Massachusetts, he has cut the carbon dioxide gas emissions from his home by 40 tons a year. That's each year, every year, forever. The even better news is that he is saving $11,000 a year in heating and electricity bills. His return on investment is about 15% a year. This handily beats the 9.8% annual return on the S&P500 over the last 90 years.

To stop climate change, start at home. Start now by giving the gift of Zero Carbon Home this holiday season. It’s the gift that keeps on giving.

About the author.
David Green holds a BA in physics (with Honors) from Oxford University and an MBA from Harvard Business School (with distinction). He founded and was CEO of two biotechnology companies. He took both public and has raised over $100m in capital. He retired from biotech in 2015 and has turned his energies to combating climate change - one home at a time. His first book is "Zero Carbon Home" and his second book is "Zero Carbon Pool." His work has been publicized by the Department of Energy, Zero Carbon Project and Cool Effects. The following are unsolicited comments from readers of the book: “Wow that was an awesome book! D.S., Mastic, New York. “Absolutely loved the book.” A.N., Weston, Massachusetts. “I’m very impressed the way you explained the technical terms…. Really good stuff.” M.B., London, U.K., and this comment came from probably the world’s leading environmentalist: “I thought the book was straightforward and clear,” B. Mc., Middlebury, Vermont.

Consulting services about how to make money by cutting your carbon footprint.