David Gatesbury's New Book 'Thunder and Fury: Whitson's Raiders' is a Thrilling Civil War Tale That Explores One Man as He Comes to Terms With Himself 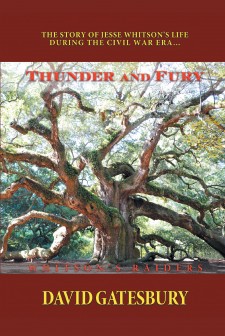 ST. LOUIS, May 11, 2018 (Newswire.com) - David Gatesbury, a native St. Louisan and prolific writer with works in several genres, has completed his most recent book “Thunder and Fury: Whitson's Raiders”:  a gripping and insightful war time epic that follows a man hardened by war and struggling to come to terms with who he has become as the world burns around him.

Published by Fulton Books, David Gatesbury’s book spans the early life of Jesse Whitson on through the Civil War, a South Carolinian who felt reluctant to fight for Southern independence.

When Southerners turned to seceding and forming the Confederate States of America, he tried to reason with people so they’d relent. He did not want to see the nation divided, and yet a meeting with a prominent figure of the time inspired him to come to terms with an inner struggle for leading a partisan command.

Riding a spirited, long-legged horse with a chestnut coat named Destin, he and his men primarily patrolled east of the Blue Ridge Mountains in Virginia, often moving into Maryland and Pennsylvania to rage war. What made him a hardened Confederate commander was how the Yankees punished Virginians for supporting their cause, burning homes, barns, and imprisoning the people.

Finding love during the high tide of this conflict, he tried to be an honorable leader and avoid retaliating for the scorched earth policies of General Sherman and others. When delving into his life, the reader will understand what made this man tick and gain an understanding of why he thought differently than most of those who lived about him.

Readers who wish to experience this riveting and sensational work can purchase “Thunder and Fury: Whitson's Raiders” at bookstores everywhere, or online at the Apple iTunes store, Amazon, Google Play or Barnes and Noble.

Antonia Frank's New Book 'Capriccio 1, 2, 3' is the Heartwarming Account of Love Between a Violinist and the Woman Who Comes Into His Life, in Three Acts
Fulton Books - Feb 10, 2020

A. F. Blom's New Book 'Odd Sense' is a Fascinating Tale of an Author's Mystical Journey Through an Uncanny World He Had Conceived
Fulton Books - Feb 3, 2020

Ty Humburd's New Book 'The Casket Maker' is a Bone-Chilling Story About a Young Man Who's Planning for a Better Future in a City Full of Darkness
Fulton Books - Jan 31, 2020
Newswire