David Gatesbury's New Book 'Jesse Whitson: The Journey Westward' is a Story That Speaks of Pioneers Migrating West and One Man That Personifies the Honor-Bound Lawman. 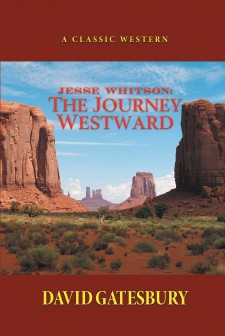 ST. LOUIS, May 18, 2018 (Newswire.com) - David Gatesbury, a native St. Louisan, has completed his most recent book “Jesse Whitson: The Journey Westward”:  an intriguing look at the world after the Civil War, as one man searches for meaning and purpose while heading West.

Published by Fulton Books, David Gatesbury’s book shares how following the War Between the States, Jesse Whitson contended with an inner struggle for being unable to find peace within himself. Soul-searching while being deeply troubled, like many looking to start a new life and pursuing a dream, he joined a cattle drive and journeyed westward. In his travels, he became a driver and, later, joined a wagon train moving west.

In Colorado, on the open range, he discovered farmers who’d acquired land through the Homestead Act. Seeing people harassed by cattle ranchers who wanted to take control of farmland to make use of it as a grazing pasture for thousands of head of cattle brought back memories of how Union soldiers terrorized Southerners during the war. The ranchers used their wealth to corrupt the law for their own benefit while pressuring helpless people struggling to live off the land to move on.

When the situation was fast reaching the boiling point, Whitson made up his mind to do something about it, and through his involvement, the common farmer found hope.

Readers who wish to experience this delightfully inspiring work can purchase “Jesse Whitson: The Journey Westward” at bookstores everywhere, or online at the Apple iTunes store, Amazon, Google Play or Barnes and Noble.

Bryan 'Nappy' Vereen's New Book 'Keep Telling YOUrself That!' is an Inspiring Book of Insights on Self-Worth and Care to Find and Fulfill One's Purpose
Fulton Books - Jan 13, 2020
Newswire