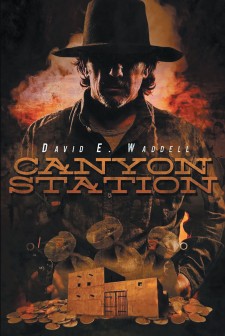 Akron, OH, July 31, 2017 (Newswire.com) - David E. Waddell, a successful author, and doting father, has completed his most recent book “Canyon Station”:  a vivid and inspiring take of letting go, relearning to trust, and the glory of the West.

Published by Fulton Books, David E. Waddell’s book introduces a group of characters looking for a new beginning and bound for adventure.

Emmett Sanders escaped from Yuma Territorial Prison after his dying cellmate, Macallum, told him where four bags of gold coins were hidden near a stagecoach station called Canyon Station. He is pursued by Marshal Zane Graves who is dispatched by a judge in Tucson to capture Emmett and bring him back to Yuma.

Cora Jennings is heartbroken after her husband, Arthur is robbed and murdered by a thug in New York City. She feels lonely and decides to start a fresh new life out in the Arizona Territory by reuniting with her Uncle who runs a stagecoach station called Canyon Station.

All four of these individuals take different paths and have different reasons for traveling to Canyon Station. Will God have any influence on their lives as they deal with outlaws, Apaches and many other obstacles along their way?

Readers who wish to experience this gritty and satisfying work can purchase “Canyon Station” at bookstores everywhere, or online at the Apple iTunes store, Amazon, Google Play or Barnes and Noble.