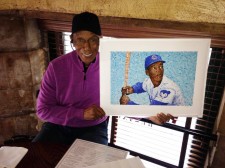 Springfield, Missouri, November 11, 2016 (Newswire.com) - ​​When Theo Epstein was announced as the new president of baseball operations for the Chicago Cubs in October of 2011, artist Dan Duff had already been sketching out ideas for a painting to honor his favorite baseball team. The excitement generated with Epsteins’ appointment and a soon to follow request from a client for a gift for her husband, who was also a fellow Cubs fan, was all that was needed to get started on a painting that would not be officially completed until the Cubs once again won a World Series title.

The creation of his painting “Mr. Cub” was to become part of a series of works Duff calls Word Portraits. These paintings are created on a gridded canvas by filling in thousands of tiny squares with acrylic paint and then painting letters in each square. Together the letters become words related to the image that is created by the thousands of squares on the canvas.

He left the last four squares of the painting blank in hopes of one day being able to fill them in...

As an artist and lifelong Cubs fan, Dan had long envisioned creating a work that encapsulated every aspect of the organization, something that depicted the players, the fans, the Wrigley Field experience and the essence of what it means to be a Cubs fan. There was only one image in his mind that could come close to embodying all of these elements and that was one of “Mr. Cub” himself, Ernie Banks.

In the spirit of true Cubs fans everywhere, Dan was optimistic that someday he’d be around to witness another championship – so he left the last four squares on the canvas blank in hopes of one day being able to fill them in with the year that the Cubs won their next World Series title. Almost five years after he started working on the painting he can now fill them in with the numbers 2016.

The original painting of Mr. Cub resides in Springfield, MO at the home of Jodi and Ryan Hamilton. On Monday November 14th, 2016 at 12:00 pm, Dan Duff will add the year 2016 to the canvas and finally get to finish the painting.

View the original painting of Mr. Cub online at http://www.duffdan.com/wordportraits/mrcub

Born in Chicago, Illinois Dan spent many days of his youth riding the El train from the 4th & Linden station in Wilmette down to Wrigley Field to watch his beloved Cubs. He attended Cubs playoff games in 1984, 2003, 2008 and the 2016 NLCS game clinching 6th game at Wrigley Field. He is an artist currently living in the middle of Cardinal country in Springfield, MO. Dan has a wife and three daughters.