Rev. Troy Perry, Gay Pioneer, Will Be the First American to Be Honored With Cuba's CENESEX Award 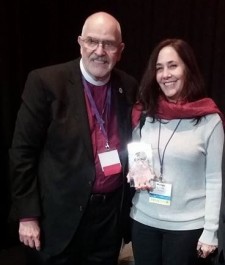 Los Angeles, CA, March 7, 2017 (Newswire.com) - Rev. Troy Perry, founder of the Metropolitan Community Churches, co-founder of the Christopher Street West (the oldest pride parade in the world), and marriage equality activist, will be the first American citizen to be given Cuba's CENESEX award. The event will take place at the 10th Cuban Gala Against Homophobia be held in the historical 5500 seat venue Karl Marx Theater in Havana May 12, 2017. Also, on May 13,the documentary, "Call me Troy," will be shown at Cuban Pavilion after the National March against Transphobia and Homophobia. The entire conference will take place from May 8-13.

The National Center for Sex Education (Centro Nacional de Educación Sexual, or CENESEX) is a government-funded body in Cuba. The center is best known for advocating tolerance of LGBTQ issues on the island. CENESEX stresses acceptance of sexual diversity and has attracted international attention in recent years for its campaigns for the rights of transgender persons, including the recognition of an individual’s gender identity, regardless of birth sex, and provision of state-funded gender reassignment surgery. The Director of the center is Mariela Castro, daughter of Cuban President Raul Castro and Vilma Espin, the brother and sister-in-law of former leader Fidel Castro.

"To say that I am honored to receive this award from Cenesex would be an understatement", Perry stated. "I am thankful that I've had the opportunity to visit Cuba and meet members of the Cuban government as well as this wonderful citizens. I am still saddened that the government of my country, the United States of America, still has not lifted the embargo against this wonderful country and its people. I call, again, for our government to make that change now!"

Perry has praised the work of Mariela Castro for working against transphobia and homophobia in Cuba. "Thank God for her. As a member of the National Assembly of the Republic of Cuba, she is in the position to be our voice to the socialist government of her country. She is a heterosexual ally, one of the only ones, who is also the mother of LGBTQ rights in her country."

Perry will be traveling to Cuba for the conference with his husband of 32 years, Mr. Phillip Ray De Blieck. They reside in Los Angeles, California.