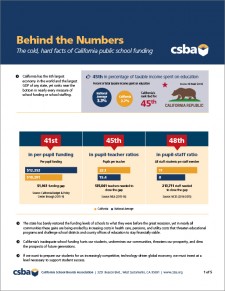 SACRAMENTO, Calif., January 8, 2018 (Newswire.com) - ​​As part of its ongoing work to ensure that all students benefit from the resources needed for a high-quality education, the California School Boards Association is calling on the Legislature to raise school funding to the national average by 2020 and to the average of the top 10 states by 2025.

“There was an era when California’s public education system was the envy of the nation and our schools were as well-funded as any in the country, but for decades now, California schools have been asked to do more with less,” said California School Boards Association President Mike Walsh. “It’s time we reverse the trend of shortchanging public schools and provide full and fair funding for all students, so they have the resources needed for success in college, career and civic life.”

California can't expect to maintain its leadership position when it's failing to invest in its future and languishing near the bottom nationally in school funding. Now is the time to reclaim California's place as a beacon of opportunity and commit to full and fair funding for all public school students.

“Our members are charged with providing a 21st-century education that prepares a diverse student population for an increasingly competitive, global and technological society. Yet, the funding from the state is inadequate for this task and just a fraction of that offered by some peer states,” explained CSBA CEO & Executive Director Vernon M. Billy. “California can’t expect to maintain its leadership position when it’s failing to invest in its future and languishing near the bottom nationally in school funding. Now is the time to reclaim California’s place as a beacon of opportunity and commit to full and fair funding for all public school students.”

Despite boasting the sixth-largest economy in the world and the highest gross domestic product of any state, California ranks at or near the bottom nationally in nearly every measure of school funding and staffing. Under the Local Control Funding Formula (LCFF), revenue for K-12 schools has only recently returned to 2007 levels, meaning funding has not substantially increased, on an inflation-adjusted basis, for more than a decade.

In order to meet the growing needs of California’s 6.2 million public school students and address the financial challenges faced by rising costs, CSBA has developed a Full and Fair Funding Resolution for adoption by its nearly 1,000 member school districts and county offices of education. The resolution highlights the threat that underinvestment in schools poses to our communities and calls on the State to meet its responsibilities to today’s students and to California’s future.

In the 1970s, California ranked in the top five nationally in school funding; currently, California is 41st and trails the average of the top 10 states by almost $7,000 in per-pupil funding, depriving students of critical opportunities for academic, social and emotional development and essential preparation for a rapidly changing economy. 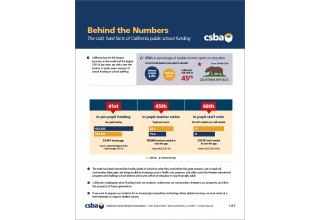 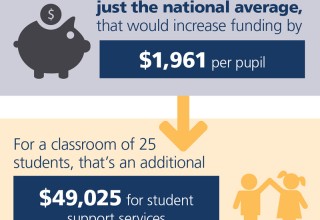