NordikCoin is an Estonian-based high-tech cryptocurrency exchange service. Propelled by the recent boom of Bitcoin, the company has announced plans to push further into Oceania and Asian Markets in 2022. 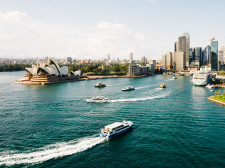 TALLINN, Estonia, October 8, 2021 (Newswire.com) - Bitcoin has flourished across all four corners of the globe, and it's safe to say that the Asian markets have welcomed it with open arms, even more so than most Western countries.

According to GlobalAsia.com, "It is in Asia where government regulators have been the most active in trying to come to terms with this financial innovation. In seeking to establish new rules to govern cryptocurrencies, they are performing a delicate balancing act, because any form of prohibition might risk sending the cryptocurrency industry underground or making it even more popular."

NordikCoin, an Estonian-based high-tech cryptocurrency exchange service, took notice of the myriad of opportunities that the Eastern markets offer for Bitcoin.

The company has announced that it will push further in Oceania and Asian markets in 2022. Amongst the new countries the exchange will open up to is Australia. Whilst expanding its global reach, the company itself and its day-to-day operations will continue to be domiciled in global finance hub Tallinn, Estonia.

Another feature in GlobalAsia's magazine points out that the Eastern markets are also worried about the high level of anonymity that BTC affords to its holders, and how that makes it prone to misuse. NordikCoin is tackling these challenges in a straightforward way. To support the expansion, the company will apply its European Know-Your-Customer and Anti-Money-Laundering rules to customers from new Asian jurisdictions.

"Our expansion into the Asian market marks a unique opportunity for the company to present its innovative cryptocurrency trading services globally. We are thrilled to announce that we will be expanding our customer onboarding processes to facilitate clients from Asian markets. We are confident that this is the perfect stepping stone for the new era of cryptocurrency exchanges, with NordikCoin leading the way."

The price of Bitcoin was spiking and steadily dropping since the beginning of April, only to surge between May and June. Throughout the tail-end of summer, it has kept a steady pace and has surged on the 30th of September and the 3rd of October. The traded volumes of BTC have tripled between the 2nd of August and the 27th of September. On the 3rd of October, the most recent date of the biggest BTC spike in the past few months, $381,964 were traded, according to BTCA Price Chart.

NordikCoin is the trading name of Estonian company OmniMatrix OÜ, with organization number 14674630. The company is licensed by the Estonian FIU with cryptocurrency license number VT000095. More information about NordikCoin can be found on the company's official website.

NordikCoin is a leading Estonian cryptocurrency exchange. The company is known for bringing innovation into the cryptocurrency space, being one of the first Bitcoin exchanges with advanced Lightning Network protocol support.

NordikCoin Set to Expand Into Asian Markets in 2021
Leading Estonian high-tech cryptocurrency exchange service, NordikCoin, is announcing that it will start accepting customers from Asian markets. The company will first begin accepting customers in selected jurisdictions, while further expansion is expected to continue in 2021. Whilst expanding its global reach, the company itself and its day-to-day operations will continue to be domiciled in global cryptocurrency haven Tallinn, Estonia.
NordikCoin - Jan 29, 2021