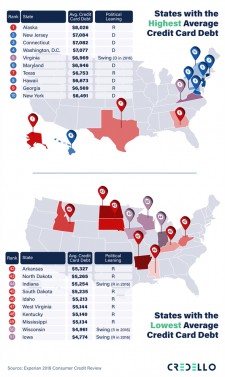 NEW YORK, October 9, 2020 (Newswire.com) - In these times of great divisiveness, something as apolitical as credit card balances surely can't put us against one another. Right?

However, of the 17 states whose average credit card debts are higher than the national average, an overwhelming majority leans left.

In fact, 14 of those 17 high-debt states (15 of 18 if you include Washington, D.C.) went blue in the 2016 presidential election, with Alaska, Texas, and Georgia being the only red outliers. For what it's worth, Alaska actually has the highest average credit card debt in the country, which is nearly $1,000 more than the second-highest (New Jersey).

More specifically, six of the top 10 states (including D.C.) are Democratic-leaning, while only two are strongly Republican. The other two states in the top 10 are Virginia—a swing state that voted blue in 2016 and is polling in favor of Democratic candidate Joe Biden in 2020—and Texas—a historically red state that appears to be more competitive than expected in 2020, according to polls.

In stark contrast, of the 10 states with the lowest average credit card debt, all 10 voted for Republican candidate Donald Trump in 2016. The bottom two—Iowa and Wisconsin (the only states whose credit card debts average below $5,000)—are swing states. Both voted Democrat in 2012 but went Republican in 2016.

Is there a correlation between politics and credit card debt?

Stats are stats, but just because the numbers exist doesn't mean they tell a complete story. There are plenty of other factors at play, so it's tough to say whether political leanings and credit card debt are directly related.

For starters, the cost of living is much higher in the top 10 states than in the bottom 10. Plus, two big East Coast cities—New York and Washington, D.C.—drive up the cost of living in surrounding states like New Jersey, Connecticut, Virginia, and Maryland. Of course, both greater metropolitan areas happen to lean heavily Democratic.

Another factor at play could be that Republicans are traditionally known as more conservative with money than Democrats. If citizens of red states spend less, then it only makes sense that those states would boast lower credit card balances. The story gets even more interesting when you look at credit scores in red and blue states.

Okay, so maybe credit card debt isn't as safe a topic as we thought. But here's something we can all agree on: Regardless of where you live or how you vote, racking up credit card debt stinks and living debt-free sounds like a goal worth pursuing.

Credello is a mobile-first platform that simplifies financial decisions by providing users with personalized, on-demand recommendations—so they can choose the best solution with confidence.