CPA Paul Regan Announces the Release of THE FORENSIC, an Untold Story of Billionaire Howard Hughes 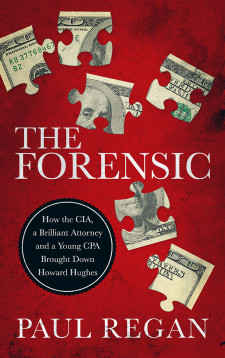 SAN FRANCISCO, September 17, 2021 (Newswire.com) - Extreme wealth seems to always have a dark side, such as the victims of jaw-dropping inequality. There is much debate if billionaires should even exist because politicians and policies are up for sale at prices that only the one percent can actually afford to pay. Rarely do we hear stories of justice concerning the richest people of all time. In this unique memoir, American business tycoon, movie director and aviator Howard R. Hughes Jr. and his pugnacious attorney, Chester Davis, were taken down by a brilliant and passionate attorney, John Bales Clark, and a diligent and talented young CPA, Paul Regan. Clark and Regan were dedicated to restoring what was wrongfully taken from their clients by Hughes and Davis.

This story evolves into a contest fought by Clark and Regan as they unraveled an injustice perpetrated by Hughes and Davis on the shareholders of Air West, Inc. Along this journey, there was a parallel track involving the CIA, the Department of Justice and a Soviet submarine carrying nuclear missiles. The connection between Clark and Regan's journey, the CIA, and the Soviet submarine was coincidental; however, without that connection, their careers may not have been as golden as they became. This secret connection, and Clark and Regan's efforts to use it to bring down Howard Hughes, have been told to only a very few, until The Forensic.

Paul Regan worked as an expert in forensic accounting-related litigation with John Clark, until John's death, over a span of 40 years. Their work together took them to many states and federal jurisdictions throughout the United States. Paul has also worked with hundreds of other attorneys in the world's largest law firms, as well as the SEC, the US Department of Justice, and attorney generals for many states. His expert testimony in the largest corporate frauds in the past 40 years has not only been presented in the United States, but in England, the World Court in the Hague (against the Islamic Republic of Iran), Canada, Australia, and Guam.

Cork Publishing Company Announces the Release of THE FORENSIC by Paul Regan, an Untold Story of Billionaire Howard Hughes
A Rare Story of Justice Draws Wide Acclaim
You Talk I Write - Sep 17, 2021