COVID-19 PANDEMIC: An INMATE'S SURVIVAL GUIDE for COMPASSIONATE RELEASE to HOME CONFINEMENT UNDER the FIRST STEP ACT of 2018, a Book by Federal Sentencing Alliance and Attorney Ralph Behr 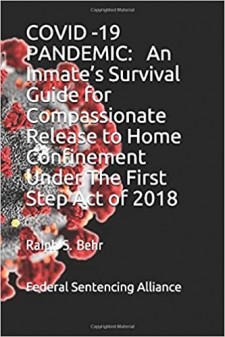 FORT LAUDERDALE, Fla., May 25, 2020 (Newswire.com) - On March 26, 2020, Attorney General Barr issued a Memorandum titled “Prioritization of Home Confinement As Appropriate in Response to COVID-19 Pandemic”, calling for federal Wardens nationwide to use the First Step Act Of 2018 Compassionate Release laws and other statutory authorities to immediately transfer thousands of qualifying inmates to home confinement, amid the Coronavirus contagion. On April 3, 2020, Attorney General Barr bootstrapped a second Memorandum titled “Increasing Use of Home Confinement at Institutions Most Affected by COVID-19”, on an emergency basis, further authorized by Congress under the CARES-Act for facilities with active outbreaks. These two Directives set in motion pre-qualification of an estimated 10,000+ inmates, by the Bureau Of Prisons, slotted for transfer to home confinement following mandatory 14-day quarantines started. In three weeks’ time, the rug was pulled out from underneath thousands of pre-qualified inmates slotted for release who were sent back to the general population. How did that occur on April 22, 2020, and why isn’t the public outraged? It occurred because the Bureau Of Prisons got permission to label Attorney General Barr’s “mandates” as mere “guidelines”, which then gave the Bureau Of Prisons unfettered authority to sub “prioritize” which pre-qualified inmates would be transferred to home confinement, and when. A steadfast mandate was turned into an arbitrary and capricious COVID-19 policy in a mere 19 days.

These shortfalls should have created a public outcry, on the basis of human decency and psychological cruelty, but so far, have mostly fallen on deaf ears. Attorney General Barr’s Directives were to meant “prioritize” the transfer of qualified inmates to home confinement, not to further dissect qualified inmates to sub-categories of most qualified or less qualified at the discretion of the Bureau Of Prisons, whose core policies are now shrouded in secrecy.

The book titled Covid-19 Pandemic: An Inmate’s Survival Guide For Compassionate Release To Home Confinement Under The First Step Act Of 2018, co-authored by Federal Sentencing Alliance and Attorney Ralph S. Behr, is available for purchase on Amazon, and details the current means, processes, requests, and petitions, available to an attorney eager to achieve a home confinement transfer for a federal inmate during the COVID-19 Pandemic. Thousands of Petitions are pending in District Courts nationwide filed by Attorneys who could greatly benefit from the information, memoranda, and legal authorities cited in this book, which were successfully used to achieve the release of a federal inmate within the last month.

Standing against the procedural undermining of inmates’ transfer to home confinement by the Bureau Of Prisons during the COVID-19 Pandemic is Florida based Federal Sentencing Alliance (contact: (954) 540-2845 www.federalsentencingalliance.com) and New York and Florida advisory Attorney and Board Member, Ralph Behr (contact: (561) 717-3000 www.RalphBehr.net), sounding the alarm, and available for further information. 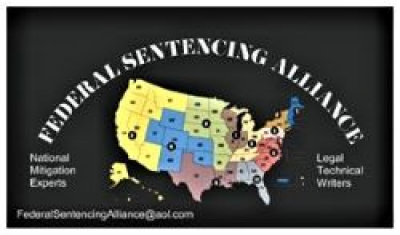