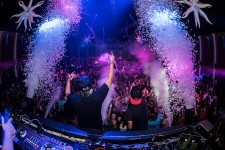 Los Angeles, California, September 27, 2016 (Newswire.com) - Perry Nelson and Matt Weichel from the DJ/Producer group, Red Cup Nation, are making a splash into the Event Planning world with their new venture, LIIV Events. For the past few years, Red Cup Nation has become synonymous with college party culture. The guys have toured across the country putting on some of the biggest, independent college tours, with shows that are known for their high energy fun. Since residing in Los Angeles for the past year, the duo has performed at several high profile celebrity parties and events. Red Cup Nation has also been featured in Forbes Magazine and Fox News, along with other notable publications and media outlets.

Fast forward to today, where the guys are back at it again with their new company, LIIV Events. Why LIIV? "Because you are never too old to LIIV," says Perry. "People would say to us all of the time, 'I wish I was younger so I could attend one of your shows.' or 'I wish I could have a party like this for my birthday.'" Well, their wishes can now come true, because clients will be able to book a variety of parties through LIIV Events, including corporate parties, wedding receptions, birthdays, or any other social event.

"Not Everyone Can Say They Turned The Best Part Of Their Lives, Partying, Into A Lucrative Career"

"The thing that makes LIIV Events different from other event planning companies is that we have been on both sides of these events. We have not only booked event planners, but have also produced the actual event itself at convention centers and outdoor festivals. We offer a unique element of fun to our events, while still maintaining extreme professionalism," says Matt. LIIV Events also offers creative packages to choose from, which are titled after Red Cup Nation's previous tours. With titles such as "Sunglasses at Night" and "Go Hard or Go Home", it is a guarantee that you and your guests will have an experience of a lifetime. Along with these creative packages, LIIV Events also offers an "A La Carte" style planning option, which allows clients to individually customize their event.

Matt explains, "A buddy of ours that we met while doing shows at Ohio University has since graduated and now works for a corporate company. He said the company was having a party and wanted us to come and DJ.  They wanted us to produce a full on Red Cup Nation show, which is extremely high energy, and includes confetti blasters, Co2 guns, laser lights, and top 40 music. Most corporate parties are simple, but his company wanted something different for his staff and that is exactly what we gave them. After that, we realized we can do this not just for companies, but also wedding receptions, birthdays, holidays, and more."

You can find out more information at LIIVEvents.com

I am a indenpendent publicist from Los Angeles. I work with artist's and companies all around the country.