While crediting President Joe Biden for publicly sharing numerous intelligence reports showing the buildup of Russian troops prior to the invasion, Stapleton was critical of Biden's decision to vacate U.S. naval forces from the adjoining Black Sea prior to the telegraphed conflict.

Turkey has since closed off passage into the strategic Black Sea for ships not homeported there.

Stapleton, a former U.S. naval officer, cited the Marshall Plan as a model for both rebuilding the infrastructure in Ukraine and providing comprehensive assistance to the devastated nations facing energy and food shortages heading into winter.  The original Marshall Plan was passed in 1948 by the U.S. Congress following World War II, to help finance the rebuilding of Western Europe.

"The Western front may be further East now," said Stapleton, "but genocide and war are just as real as then."

Stapleton called on President Biden and the U.S. Congress to pass Marshall Plan II, providing an infrastructure and financial roadmap for war-torn Ukraine, coordinating with European and NATO allies and ending the Russo-Ukrainian War.

About Pay it Forward: Corey Stapleton for President 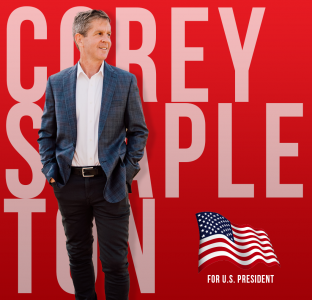