CVMR® and EnerCarbon® have been able to Capture CO2 that is emitted from various industrial outlets and convert the captured CO2 into value-added products with a high level of market demand such as graphite and graphene. The project is partially funded by the "Solutions 2030 Challenge" program of the Ontario Centers of Excellence (OCE). 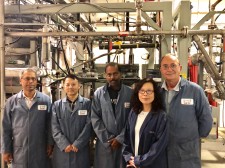 TORONTO, September 18, 2018 (Newswire.com) - ​In the past three years, CVMR Corporation (CVMR®) and its sister company, EnerCarbon® Inc. (EnerCarbon®), have been developing a process by which they can capture CO2 emissions from industrial operations of various scales through a novel modular technology replacing the conventional absorption towers and scrubbers. The goal is to capture CO2 from industrial plants such as utility plants, oil sands producers, chemical manufacturers as well as those that have much smaller operations. The captured CO2 is then converted into stable and value-added carbon byproducts, such as graphite and graphene. CVMR® and EnerCarbon® have established the concept for the economic capture of CO2 at various scales of emission. They have successfully demonstrated the production of graphite and graphene from the captured CO2 at their own joint facilities located in Toronto, Ontario.

The existing technologies for post-combustion application rely mostly on absorption towers that suffer from complicated operational problems such as large footprint, inflexibility for treating diverse flue gas streams and toxic chemical carryover, all of which are impediments to small and medium size companies. In addition, it is challenging to convince the producers to integrate currently available CO2 capture technologies into their plants due to the high costs and the potential for interruption in their production flow. Another major challenge is the disposal of captured CO2 or its conversion into stable products that are simple to transport and do not require elaborate infrastructures.

Most of the approaches for valorizing CO2 are either energy-intensive or suffer from low payback rates, neither of which is financially attractive for the private sector. The rationale behind the development of the new technologies by CVMR® and EnerCarbon® are:

In May 2018, CVMR® was awarded a substantial grant provided by the Government of Ontario through the Ontario Centers of Excellence ("OCE") under a three-phase competition over three years, called Ontario's Solutions 2030 Challenge. The grant is in support of the project led by CVMR® to uptake CO2 from industrial operations and convert it to graphene and graphite.

Since May 2018, when the grant was awarded, a joint team of engineers and researchers at CVMR® and EnerCarbon® have successfully designed, built and commissioned their proprietary bench scale prototype for capturing CO2 and converting it into graphite.

Their CO2 capture unit offers a modular technology and easily scalable membrane scrubber units that enable efficient CO2 capture at a reduced capital cost and reduced footprint (up to 50%) as compared with conventional absorption towers. CVMR® and EnerCarbon® have successfully advanced this phase, explored availability of diverse membrane materials among various manufacturers, worldwide, and have built different membranes and tested them at simulated conditions of flue gas from power plants using commonly available basic chemical absorption liquids. They have explored the optimum operational conditions of the system through numerous trials and have achieved CO2 capture results of over 97%. The task ahead led by CVMR® is to prove the efficiency of the modular units under diverse conditions and applications with significant variations in process parameters such as inlet gas flow rate, gas composition, temperature, and pressure. The company’s engineers and research scientists have collected a wide range of operational data, including screening of absorbent chemicals for efficient CO2 loading, required membrane surface area, operating pressure and temperature and effective release of CO2 from these chemicals, in order to enable CVMR® to scale up the operating units.

The CO2 regeneration of conventional absorption systems is always a challenge and requires a large thermal input and, therefore, it imposes a large energy penalty to the process. To address this issue CVMR® and EnerCarbon® have developed a novel concept, as part of their ongoing phases of the OCE supported project resulting in the release of CO2 at lower energies as compared with the conventional thermal regeneration operations. This system reduces the energy consumption significantly and minimizes the operational cost.

To valorize the captured CO2, CVMR® and EnerCarbon® are developing a promising approach that relies on CVMR®’s proprietary chemical vapor deposition technology for oxidation (exothermic), reduction (endothermic) reactions of CO2 with catalytic mineral materials. This is achieved through a controlled gas-solid reaction. The process is energy-efficient and can increase the revenue from the sale of the valuable CO2 sourced byproducts such as graphite and graphene. Since their OCE project started, the team of researchers at CVMR® have designed and commissioned a bench scale catalytic carbon production unit from CO2 gas that has successfully produced graphite products at preliminary testing conditions. CVMR®’s R&D team is currently exploring methods to optimize the conditions that would maximize CO2 recovery and graphene production.

The process targets a wide range of small to large-scale industrial CO2 emitters. Kamran Khozan, Chairman of CVMR® and EnerCarbon® stated that “Upon completion of our partially funded project by OCE, it is expected that we will have collected enough information for the design and construction of our pilot unit bringing the system closer to commercial readiness.”

The production of graphene and graphite from captured CO2 is in line with CVMR®’s creed of environmental protection and development of technologies that help reduce environmental pollution. For the past 30 years, CVMR® has been engaged in mining and metal refining of some 36 metals, using its proprietary vapour metallurgy processes and technologies and its own mineral resources. The processes it uses are completely neutral to the environment. They produce no air, water or soil pollution. CVMR® continues to produce high value metal powders, nano-powders, subnano-powders, net shapes and super alloys, using CVMR®’s proprietary processes. The metal powders provide the feed materials for 2D and 3D Printing (Additive Manufacturing) and Metal Injection Moulding (MIM).

According to the Chinese National Bureau of Statistics the market projection for Vanadium Redox Flow Battery demand measured in Mega Watts (MW) in the top 10 industrialized countries is growing at a compound annual growth rate of 80% from 2013 to 2020, ultimately culminating in more than 7,000 MW of vanadium-flow capacity needed by 2020.

CVMR® is now testing the application of its vanadium dioxide (VO2) directly to glass to create smart windows. This could allow glass to regulate the amount of heat that passes through, depending on the ambient temperature. VO2 acts as an insulator in this case. At high temperatures, above 65°C the substance turns opaque to infrared solar radiation while remaining transparent to the human eye. Thus, the sun’s heat is prevented from passing through the clear glass. It could help meet some of the future energy needs and create temperature-responsive buildings.

CVMR® acquired three extensive mining concessions with significant proven reserves of vanadium, nickel and cobalt in Burundi last year. It is now negotiating with various battery manufacturers in US, Europe and China with the aim to manufacture a series of novel batteries for the automotive and industrial use. It’s joint effort with EnerCarbon® and M-Power Corporation has expanded to the manufacture of off-grid mobile energy production units using graphene-based solar panels, all sourced from its current development in capturing CO2 from various industrial sources.

CVMR® Wins Two Massive Concessions of Nickel and Cobalt in Burundi
CVMR®, with its unique proprietary technological advantage, has successfully added two more mineral concessions to its portfolio in Africa. The company can now boast three world-class mineral concessions of Vanadium, Nickel and Cobalt, combined with Copper and Iron in Burundi.
CVMR® - Sep 20, 2018
Coal as Renewable Clean Energy. 'By turning coal to graphite, which can collect and store heat from the sun, one can produce electricity.' M - Power Corp.
CVMR® has been able to convert natural coal to graphite flakes, powders and graphite blocks at much lower cost than the current methods in use. They have simultaneously managed to produce graphene from methane gas.
CVMR® - Jul 22, 2016