The contents of the Time Capsule, which may have belonged to Jules Verne, are revealed. 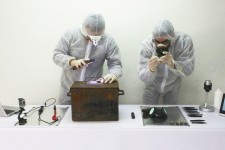 NEW YORK, September 19, 2017 (Newswire.com) - The archaeological team who discovered a 19th-century metallic box in the French Pyrenees a few months ago have finally revealed its contents. It is thanks to the works of Jules Verne that the box was discovered, and particularly to the analysis of the writer's tomb.

Archaeologists and historians from the original team, alongside experts from The Explorers Club NYC, worked together during the opening and extraction of the contents of the box, all having previous experience in handling similar historical artefacts. The contents of the box have been unveiled via an online video.

In the video, we can see that to avoid breaking the lock, experts tried to access the box from the side using a snake camera. This proved unsuccessful due to its complexity and they eventually had to force the lock. Among the metal-based objects that were found: a telescope, a triangle, a medieval coin, a simple ring, a necklace and a key. All were found in a state of advanced oxidation.

Among the other extracted pieces that were found: a book relating to a mining treaty, containing several alchemic references; a leather notebook with documents inside; a map of Europe with noticeable marks on Peloponnese regions and documents about the phases of the moon.  Interestingly, a copy of a New York newspaper dating from 1890 was also found, with a story referencing Nellie Bly, who had managed to break the world record by traveling the world in 72 days, inspired by Jules Verne's novel.

The most noticeable aspect of the documents are the number of anagrams, lines, and manuscripts with symbols and drawings which are unclear, and may be cryptograms or codes from an unknown secret society. Although it is not yet confirmed whether the documents and objects found actually belonged to Jules Verne, everything indicates that they had at least belonged to the sculptor of the author's tomb, or people close to him.

According to our sources, experts are beginning to scan and catalog every one of the items found. A report will then be written showing their results and conclusions.

The complete video of the opening of the box can be found here: https://youtu.be/IQSlSaT1n9g 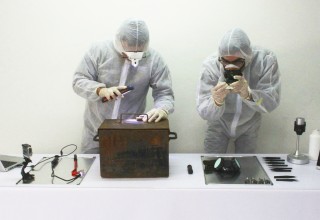 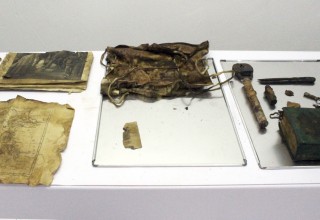 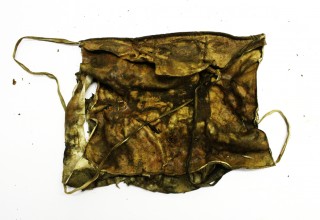 A Time Capsule Associated With Jules Verne Has Been Discovered in the French Pyrenees
A multidisciplinary team of archaeologists and historians from the Paris Descartes University have made an extraordinary discovery.
L'Université Paris Descartes - Apr 4, 2017
Newswire