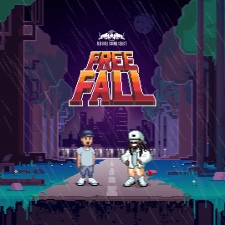 LOS ANGELES, CA, February 10, 2017 (Newswire.com) - 21-year-old Scottish phenom Connor Pearson and newly GRAMMY-nominated rapper D.R.A.M. have once again partnered with Red Bull Sound Select to transform their soulful dream-pop collaboration “Free Fall” into a full-fledged video game that channels all of the greatness of 8-bit nostalgia while still maintaining an exciting modern flair. Choose to play as Connor Pearson or D.R.A.M. as you soar through the air to the soundtrack of “Free Fall,” collecting guitars and stacks of money while avoiding broken hearts and adorable poop emojis.

"Free Fall feat. D.R.A.M" was released as part of a two-song digital single via Red Bull Sound Select in October of last year. The song was partly inspired by Pearson's first trip to the States in 2015 where he was introduced to producer Doc McKinney. The two immediately headed into The Little Big Room studios (Eminem, Michael Jackson) and wrote and recorded “Free Fall” as well as the second track from the release, “That Way”.

The experience was overwhelming for Connor, who had previously only ever sung live in front of one other person. "The new setting in LA, with sunshine, surrounded by all the awards hanging in the studio and working with the legendary Doc McKinney definitely inspired the instrumentation in the song," said Pearson.

Red Bull Sound Select is an accelerator for music artists. We support them by collaborating on ambitious projects and ideas; using the strength of our global network together with a collective of artists, creatives and events to accelerate their growth. The network consists of 20 city residencies, 200+ events each year, 250+ artists, 50 partners and a growing list of our own festivals like 30 Days and 3 Days in Miami.

Our mission is to accelerate artist growth on a global scale, helping to support music communities.