The Original Selfie Fan™ with Self-Programmable LED messages, is the next generation of factory pre-programmed souvenir and novelty LED message mobile fans which are also slated to hit retail stores this Summer.

“And now, with the help of KICKSTARTER we’ll be able to deliver the world’s first
SELF-PROGRAMMABLE Selfie Fan which allows the user to download an app, and then through proprietary technology, and a wireless Bluetooth connection, customize, program and send their very own illuminated LED messages to the fan blades, over & over again!”

Users will have fun telling the world what’s on their mind, and what they’re feeling and thinking while keeping cool with their smartphone while at a concert, ballgame, nightclub, casino, rave, music festival, bar or restaurant, and just about anywhere else a cool breeze is needed.

The Original Selfie Fan™ with Self-Programmable LED Messages has multiple patents pending, comes with a clever 2-in-1 connector, suitable for both iOS & Android OTG smartphones, a swivel feature, and an on/off button. The Company is also developing an adapter for the newer USB-C smartphone ports.

Users will also be able to choose from 7 LED colors and up to 16 characters while having fun self-programming multiple LED text messages and sending them to the fan over and over again, changing them as often as they like.

A powerful yet quiet motor, and safe vinyl blades, will provide exceptional cooling power for those that are on the go and whenever there is a need to cool down.

The Original Selfie Fan™ with Self Programmable LED Messages is powered by one’s smartphone, but will consume very little battery power!

“We are confident everyone is absolutely going to love the interactive nature and effective cooling features of these colorful mobile gadgets”, Butler goes on to say. “We can’t wait to launch our Kickstarter and introduce our product to the market”!

The Original Selfie Fan™ with Self Programmable LED Messages is scheduled to be launched on KICKSTARTER on/about Feb. 22, 2018. It is expected that the product will be available in select retail stores and online Late Spring/Early Summer 2018.

For More Information and interest in Domestic/Worldwide & Retail or
Promotional Distribution: 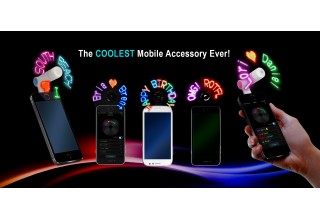 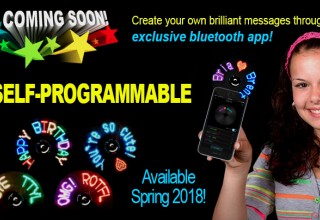