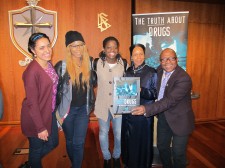 London, UK, April 18, 2016 (Newswire.com) - Faith leaders, dignitaries and community advocates gathered at the London Church of Scientology this past weekend to tackle crippling drug addiction. Despite their varied backgrounds, beliefs and interests, those attending agreed on several crucial points:

"Every single day I try and make a difference in someone's life. Sport is very important because it keeps you focused."

·      With peer pressure currently endorsing drug abuse, it is vital to reverse this and generate peer pressure not to take drugs

·      It will take everyone working together to eradicate drug abuse.

The need for broad community support of drug prevention is clear: The U.K. has the highest drug use of any European country.  Some 15 million Brits have tried drugs—a staggering 25% of the population. And according to the National Crime Agency, drug trafficking into Britain costs the country an estimated £10.7 billion per year.

Spokesperson for the Foundation for a Drug-Free World London and Director of Special Affairs for the Church of Scientology London Mark Pinchin began the conference by introducing those attending to a program anyone may use to take effective action: The Truth About Drugs campaign. The Church provides The Truth About Drugs drug prevention materials free of charge to community leaders, mentors, parents and educators.

Mejindarpal Kaur spoke of the need for effective community support of those addicted to drugs and alcohol. “We need to de-institutionalize the way we help those who have a drug or drink problem,” he said. “We need to treat each of them as individuals with a mind and soul.”

Goldenfritz Ngarizemo is in London training for the Rio 2016 Summer Olympic Games. He spoke of the importance of sports, which gives teenagers something positive to do. “It’s important to live a drug free life,” he said. “Every single day I try and make a difference in someone’s life. Sport is very important because it keeps you focused.”

East Ginstead Mayor Councillor Dick Sweatman, who launched the “Mayors Against Drugs” national campaign in March, spoke of his work using the Drug-Free World materials and how he is campaigning for drug education in schools in Sussex.  “What impressed me so much about the Truth About Drugs materials is that they don’t preach a ‘just say no’ message,” said Councillor Sweatman. “Instead, they give all the facts about each drug so a user or potential drug user, be they young or old, can be fully informed about the choices they make in this area. I have been spreading the message far and wide, to other mayors, police officers, other councillors.”

Anyone wishing to attend a free workshop on The Truth About Drugs to become a drug education specialist should contact Mark Pinchin at the Church of Scientology London, 146 Queen Victoria St., London EC4V 4BY, United Kingdom or call +44 20 7246 2700 or visit the Drug-Free World London website at http://drugfreeworld.org.uk.