Community and Police Team Up for a Better Neighborhood 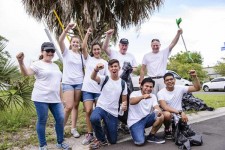 Clearwater, Florida, August 7, 2016 (Newswire.com) - A diverse team of volunteers joined the cleanup of a stretch of the Pinellas Trail, organized by the Clearwater Police Department.

Participating were members of The Way to Happiness Association of Tampa Bay, North Greenwood residents, volunteers from the Pinellas County Parks and Conservation Resources Department’s Auxiliary Ranger Program, students from the Washburn Academy and local Scientologists.

The Pinellas Trail is a protected greenspace for walking, jogging, skating and biking, extending 47 miles along an abandoned railroad line from St. Petersburg to Tarpon Springs. It is managed by the Pinellas County Parks and Conservation Resources Department.

The volunteers tackled a section of the trail that runs through North Greenwood, a Clearwater municipal zone of more than 7,000 residents.

Known as a cultural hub decades ago, in recent years North Greenwood declined and became known as a high-crime, low-income neighborhood. When the crime rate peaked in July 2015, local residents banded together to upgrade the area with various projects to improve the facilities and environment of the neighborhood.

One of the projects undertaken was frequent cleanups, a function listed by the National Crime Prevention Council as one of the 20 communities initiatives than can reduce crime.

Clearwater Police Sergeant Wilton Lee directed the operation Saturday, July 30. He thanked each volunteer for their participation in this important project.

City Councilman Bill Jonson, who joined in the cleanup, said he hopes the work of the volunteers will set an example and influence others to treat the neighborhood with pride.

Since initiating cleanups and other projects to upgrade the North Greenwood neighborhood, crime has dropped 56 percent, according to a recent Pinellas County report.