Italforni conveyor and deck ovens are the future of baking. The standout Italian company specialized in ovens, Italforni USA, is the Los Angeles based partner of the Italian company opened in 1978. Having opened USA branch in 2015, Italforni potential to change the baking industry with innovative ovens that capitalize on benefits of hearth stone cooking. Our advice: go to Italforni USA booth #1783 before you make your way around other booths. Why? Because you need to see this first! 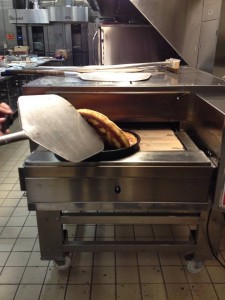 Chicago, Illinois, May 20, 2016 (Newswire.com) - ​​Italforni USA is the company that's raising the bar for quality and technology of pizza ovens in 2016 throughout all of North America - restaurateurs are jumping on their bandwagon by the hundreds, with plenty more new Italforni customers expected to join the others after seeing Italforni at the 2016 NRA Show, where the company is showing its product lines in booth #1783!

Italforni USA is becoming a major name for pizza and bakery ovens in USA and Canada since its start in 2015 - their product mix of ovens from Italy has unlimited applications for pizzerias, bakeries, supermarkets, restaurants and beyond. All of these ovens feature cooking technology where the product is cooked directly on hearth stone surface. Their stone conveyor oven alone is notorious among chefs and restaurant equipment dealers, as it is easily distinguished from their other conveyors by the 70+ stones that form the cooking surface on the conveyor belt system fo this oven.

Italforni USA products to be displayed at NRA Show 2016 include

Hundreds of exceedingly happy Italforni customers and operators have voiced themselves over the first year of operation for Italforni USA. Found all over North America, chefs and operators who switched to Italforni are also the best promoters of Italforni products, as these same folks also speak to Italforni USA after the sale and have had nothing but great things to say about these ovens. Attesting for the claims made by Italforni about the ovens and speaking from their own experience, chefs who cook on Italforni have already witnessed that the quality of ovens is actually driving the competitive advantage for their whole operation more so than anything else. In fact, over the last year the amount of positive feedback that was provided to Italforni USA from Italforni owners and operators in North America is even more than the company expected, so Italforni USA digested and summarized all of the competitive advantages mentioned to us into 3 key common improvements directly related to using Italforni ovens:

Italforni's ovens come directly from their factory in Pesaro, Italy. Having earned the business of Europe's top pizzaioli and most successful chefs since its inception in 1978, Italforni is represented in North America through its partner Italforni USA since May of 2015. Industry experts note that this new partnership is the driving force behind Italforni becoming a major brand in North America. There is no denying the popularity of their attractive, dependable and innovative ovens. Please see us at NRA 2016 in booth #1783, or visit italforniusa.com to find out more.