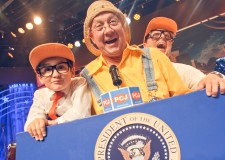 Branson, MO, October 6, 2016 (Newswire.com) - Herkimer Presley is continuing his run as a write-in candidate for President of the United States, his 14th consecutive campaign since 1964. As a founding member of Presleys' Theatre and one of Branson’s original comedians, Herkimer is reaching out to voters with a viral campaign video that has been viewed over 35,000 times in just 24 hours. According to Cecil, “You’ve got Trump and Clinton debatin’ around, but vote for Herk and get a real clown!”

Herkimer’s son and comedic sidekick Cecil has been announced as his running mate, and together they are continuing a tradition that began when Lyndon Johnson faced off against Barry Goldwater over 50 years ago. A few things have changed since then, including Herkimer’s custom designed Segway podium that has been making people laugh all season long.

With campaign t-shirts, hats and an online video campaign, the Presley family continues to reach out to Branson visitors in new and innovative ways. The Presleys are known as Branson's First Family of Entertainment, building the first live music theatre there in 1967. Today, Branson is one America's top vacation destinations.

Voters are encouraged to visit the Presleys’ Facebook page for more videos and campaign updates during the month of October. The Presleys also produce a weekly TV Show seen by more than 1.5 million viewers each month, airing at 6:30PM every Saturday night on RFD-TV. For more information on Presleys’ Country Jubilee live show in Branson, or to purchase tickets, visit www.presleys.com.