Combating Drug Abuse in Africa With Truth About Drugs 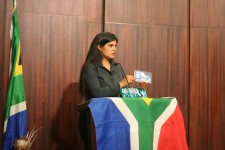 "South Africa’s population is one-third the size of Nigeria,” said Bishop Obgu, “yet South Africa's drug use is double that of Nigeria."

"Those attending were impressed with how well the information communicates to young and old."

Also participating from Nigeria, Bishop Joshua spoke of his firsthand experience with drugs before he was saved. He spoke of the young people who inject the deadly drug Nyaope on street corners in Johannesburg. It’s so popular there, you would think the dealers were handing out candy, he said.

Volunteer Tony Mathipa shared his experience with young drug addicts and their ignorance of the dangers of the drugs they are consuming. They think it’s all fun until they are hooked on the drugs but by then it's almost too late, he said. “We need to reach the youth before drugs do."

Many of the delegates traveled great distances to attend the conference and they were satisfied it was worth the effort to be there when they saw the drug prevention materials. The Church of Scientology makes these materials available free of charge to anyone willing to use them to combat the drug menace. “Those attending were impressed with how well the information communicates to young and old,” said Drug-Free World Africa Coordinator Maurithus Meiring.  He believes that we can end this epidemic  as long as committed humanitarians such as those who attended the conference bring the truth about drugs to communities throughout the continent.