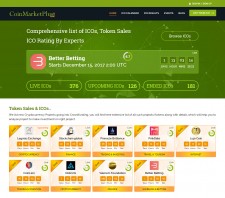 New Delhi, India, January 29, 2018 (Newswire.com) - With robust capabilities and enormous opportunities in the crypto world, CoinMarketPlus.com is offering ICO rating and ICO voting, which will help investors to choose the best ICO.​

CoinMarketPlus.com is an emerging initial coin offering listing platform, where investors will get a comprehensive list of ICOs, token sales, and ICO results. With a dexterous and seasoned team of professionals its objective is to provide a robust and authentic platform to investors, thereby they can leverage the best opportunities in initial coin offering in 2018 and beyond.

As the crypto market becomes mature and larger, the concept of initial coin offering is proving a masterstroke. If we study the recent stats, then the number of the project raising fund through the initial coin offering is increasing steadily. In 2016, 64 major projects raised over $103 million through ICOs and in 2017 and more than 75 projects raised over $ 200 million through ICO. So from this data, it is not difficult to guess that in near future the ICO market will set a new landmark and change the landscape of existing market.

With the passage of time, ICOs are growing exponentially, where many users/traders have become frustrated with the way most platforms only trade in a specific type of Cryptocurrency, the same chances of scam is increasing. According to the prestigious Forbes.com in 2017, more than 15 Million ICOs were halted by the SEC for being an alleged scam. To prevent such fraudulence in ICO; CoinMarketPlus has come up with initiatives, ICO rating, ICO  and ICO voting. Where ICO rating makes the ICO market cleaner and transparent, the same, ICO voting will help investors to invest in the best ICO. Apart from that, ICO voting will also prove helpful to track the upcoming ICOs, track the result of ICOs and allow investors to see their performance.​

The rating methodology of CoinMarketPlus is transparent and never compromise with rating criteria. While rating the ICO, their team go through all ICOs white-papers, check their team member’s profile, check their past achievements, compare their ICO with competitors, evaluate total supply and calculate per unit price and come up with ICO Rating.

CoinMarketPlus, investors will get a comprehensive and curated calendar of token sales & ICOs. We have a spirited and experienced team of professionals, who maintain the only complete calendar of all active and upcoming initial coin offerings (ICOs).