MILWAUKEE, WISCONSIN, February 3, 2018 (Newswire.com) - ​Clip Grip is a universal handle attachment that makes holding containers effortless. The silicone handle features a patented belt and clasp system that can fit any container including bottles, jars and large tumblers. Current handle accessories are designed for a specific container, meaning that consumers are cluttering their drawers and spending too much on additional accessories.

“It’s about time we have a universal handle attachment,” says the inventor of Clip Grip Justin Bauer. This product was recently launched on Kickstarter and was 50 percent funded within four days of launching. The campaign will continue through March 1. The messaging on the crowdfunding page positions Clip Grip as an excellent gadget for beer and jar drinkers, tumbler users and people with motor skill impairment.

Justin says he came up with the idea after he saw massive amounts of jars and fancy containers on Snapchat and Instagram last summer. He designed and prototyped the idea and then took to social media where the story got interesting. “After advertising, we received several passionate responses from people with arthritis, cerebral palsy and even someone missing an arm. I was quite shocked that there wasn’t a dishwasher-safe, effective and reasonably priced drinking solution for these underrepresented communities.”

In response to the feedback, Justin sent sample Clip Grips to Tye, an 11-year-old with cerebral palsy. “The results were great! Tye’s grandmother said that he was able to hold on to containers easily and not lose control. He can now drink with less spilling, which removes some of the hassle for Tye and his caregivers.”

Despite Clip Grip originally being developed as a beer and jar gadget, the device ultimately tackles serious issues such as helping people with motor skill impairment effectively hydrate with less pain and hassle.

Clip Grip is dishwasher safe and fits on any drinking container. The material is an FDA approved food-grade silicone, contains no BPA and is rated to 500°F (260C) and -40°F (-40C). The interlocking clasps which allow Clip Grip to stay on indefinitely surpassed various quality tests. Frequent reassembly is not required which benefits arthritic and medical users of Clip Grip.

The design and material selection of Clip Grip substantially reduces heat transfer from the hand to the container. During a temperature study, a beer was kept cold three times longer with Clip Grip as opposed to holding it normally.

After funding, this startup will be developing software to allow people to customize colors and print custom text on their Clip Grips for weddings, company outings and events of that nature. “I think it’s going to be a big hit on social media,” says the founder.

Clip Grip is currently available for pre-order as part of the Kickstarter campaign, where it’s selling at $7.50 and available in six colors. It will retail for $9.95 after the campaign ends.

To learn more about Clip Grip or to book an interview, contact Justin Bauer at Justin@clipgrip.fun or visit www.clipgrip.fun. 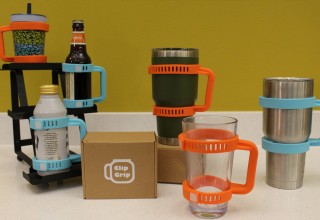 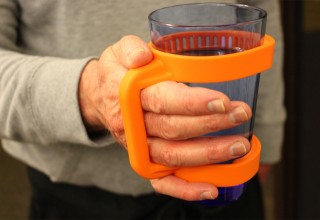 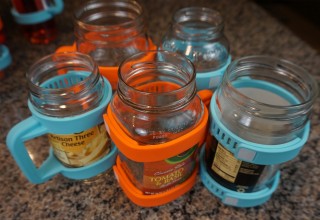 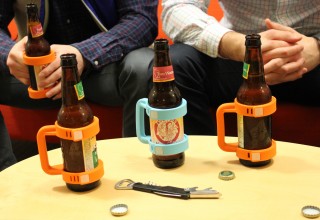